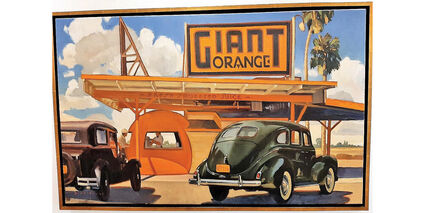 If you're feeling the need for a little culture to start off the new year, may I suggest the Bakersfield Museum of Art. It's one of my favorite art museums and the art on display there is worth the trip down the hill.

I made the trip a few days before Christmas, and I wish I had gone sooner as two of the current exhibits are only up through Jan. 7, 2023. That means your time to see the ones I'm talking about today are limited, but never fear, there is always great art on display any time you choose to visit.

Located in the southwest corner of Central Park – which is complete with picnic tables, restrooms and a community center, but separate from the museum – the Museum of Art also has its own peaceful and private garden in back, perfect for walking, reflecting, or for renting and celebrating such human milestones as birthdays and weddings. All along the paved pathway are flowers, bushes, fountains, trees and specially selected large outdoor sculptures.

The Museum, originally built in 1956 as the Cunningham Memorial Art Gallery (to honor the benefactor's daughter, artist Marion Osborn Cunningham), was ultimately given to the city upon its completion and renamed in 1990 and features both permanent collections and rotating exhibits.

The current special exhibits are "Under the Kern County Sky," which features the work of Prapat Sirinavarat, and "Of Rope and Chains Her Bones are Made," featuring the works of nine Los Angeles based artists.

Both exhibits offer unique visual experiences. Sirinavarat's work definitely suggests his personal "Buddhist values" in works that are both "surreal... and dreamlike." The artists on display in "Of Ropes and Chains..." present a variety of visions in a variety of materials that suggest "dichotomies between physical strength and fragility, and palpable manifestations of energy." Those are the official descriptions anyway; I just thought they were really cool to look at.

One of the additional gallery rooms was closed when I was there as they were busy putting up a new exhibit. I don't know what it is going to be but I'm sure it will be in keeping with their high standards.

It was a pleasant day when I was there, so I also spent some time in the Tejon Ranch Sculpture Garden, the outside area of the museum which features a green and shady place to walk and several benches on which to sit and contemplate.

New winter exhibitions open on January 26. They include "A Survey" by Helen Lundeberg (running through May 6); and "Vista" by Rotem Reshef (running through Sept. 6). In addition, "Color and Abstraction: from the Bakersfield Museum of Art's Permanent Collection" will be featured running through April 8.

The Museum is open Tuesdays through Saturdays from 10 a.m. to 4 p.m. (closed Sundays and Mondays and most major holidays). General admission is $10 for adults, $5 for seniors 62 and up and students, and children 5 and under are free. Memberships are also available (various levels and costs) and members can have unlimited access to the galleries' exhibitions free of charge, plus a number of other perks. 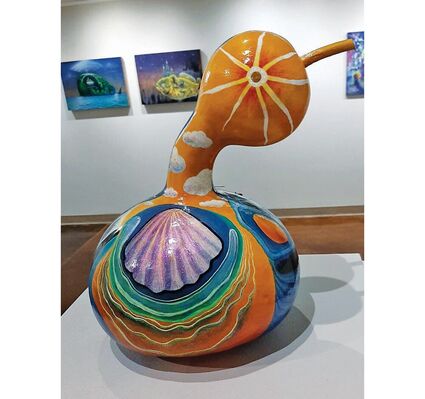 Acrylic on gourd and mixed media by Prapat Sirinavarat, titled "Time at Sea 2000."

The Bakersfield Museum of Art is probably not on your regular beaten path whenever you're down that way, but it's easy enough to find and it's right in the revitalized Mill Creek area, now called the Bakersfield Arts District (also near some pretty fine antique stores and yummy eateriesa). To get there, take Highway 58 West to Bakersfield. Exit onto Union Avenue and head north to 19th Street. Left (west) on 19th Street and then a right (north) on R will get you right to the entrance (the entrance is at 20th and R).

Note: The museum and grounds are wheelchair accessible. No food or drink is allowed inside the galleries; no backpacks or large bags are allowed in the galleries either (you can check them in at the front desk).

© 2022 Mel Makaw. Mel is a local writer and photographer and avid day-tripper; she welcomes your comments, questions, and suggestions at morningland@msn.com.