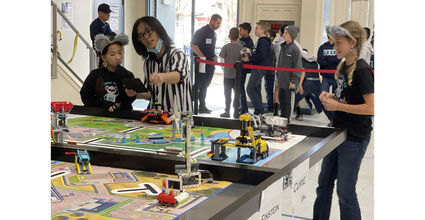 Koding Koala team during one of three of the robot competition rounds at 2022 Duncan Dynamic Qualifier.

The Tehachapi Girl Scouts Lego Robotics Team, the Koding Koalas, Team 55502, would like to thank all the mentors that assisted them in their inaugural year with the FIRST LEGO League (FLL). The Koding Koalas competed at the Duncan Dynamic Qualifier in the California Central Valley FLL Regional competition on Dec. 3 and won first place for the innovation award and was given the opportunity to advance to the Central Valley FLL Championship competition on Dec. 17! As a rookie team with rookie coaches, the Koding Koalas consist of two Girl Scouts juniors, Harper Mitchell and Serena Thornburg, who are both in 5th grade. They are coached by Nicholas Aldava and Nena Thornburg, and mentored by former Lego Robotics coaches Joanne and Reagan Woolf.

The Girl Scouts Koding Koalas gained real-world problem-solving experience through a guided, global robotics program that is fun and hands-on. They worked hard for months learning how to build and program a LEGO robot that navigates missions in a robot game. The team also completed a team project/challenge where they had to identify a problem, develop a creative and well-researched solution, and effectively communicate their findings to competition judges and the community.

After exploring three different possible problems, the team decided to focus on the challenge of charging smartphones using Clear Solar, a clear screen cover that can facilitate solar charging. The team researched the development of clear solar cells and made a model using conductive glass, nano titanium oxide, and raspberry juice to trap solar energy and convert it to electricity. In awarding the team with first place in the Innovation Project Award, the judges stated, "Our innovation project award-winning team presented a clear solution. Their sweet charging tech can be the future of phone charging. Normally these bears eat eucalyptus leaves, but for this project they prefer raspberries." 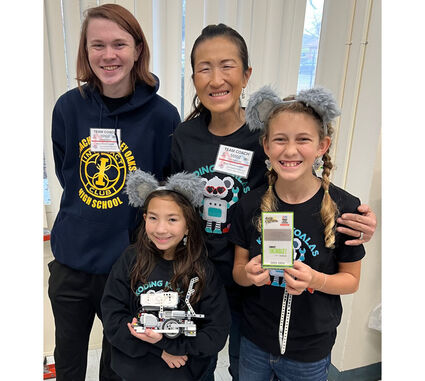 Both the girls and the coaches agree that winning an award wasn't their primary goal. The FIRST LEGO League was founded in 1998 to engage students through playful and meaningful discovery in science and technology. FLL emphasizes a cooperative environment where teams help each other to create ideas, solve problems, overcome obstacles, and gain confidence in their ability to use technology. Coach Nicholas Aldava, senior at Valley Oaks Charter School, said "10 years ago, I was at my first qualifier competition in FLL. It was crazy then and it's still crazy. It's awesome to see the kids today doing what I did 10 years ago. FLL is one of the best things that happened for me and I always wanted to come back as a coach. Being able to coach and give back to the FLL community has been awesome." These enriching experiences and relationships make all the hard work worthwhile. For more information on the program, visit firstlegoleague.org.

– Nena Thornburg is a parent, coach, and Girl Scouts leader for the team.