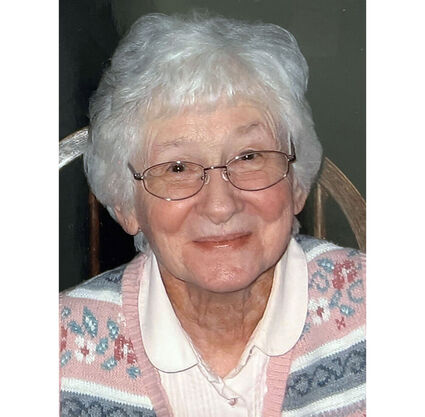 Ruth E. Ingraham, 95, of Tehachapi, passed away unexpectedly, but quietly, in her sleep on the morning of Dec. 5 in her home.

Ruth was born on Aug. 9, 1927, in Los Angeles, California, to Ross and Clara Raymond. Ruth attended primary school at Kemple Unified School District in Little Rock, California, and graduated from Antelope Valley High School before attending Antelope Valley Jr. College, then when onto L.A. City College where she obtained her B.S. Degree. After college, she went on to work at L.A. County Sheriff's Office in Lancaster and then went work for NASA at Edwards AFB.

From there Ruth transitioned into education and taught 1st grade at East Side Union School District in Lancaster from 1963 to 1985. While teaching, Ruth obtained her master's degree in education from Pepperdine University. Ruth also worked as a children's librarian from 1985 to 1993. In 1964, Ruth met the love of her life, Charles "Chuck" Ingraham, married in 1965, and they spent 36 years working together as they built their family in Lancaster.

After retiring, Ruth and Chuck pursued a quieter life closer to nature and family with a property in Golden Hills, but Ruth continued to inspire young and old minds alike as a continuous learner, and a selfless volunteer and philanthropist. Ruth found purpose sharing in the successes, joys and challenges of those around her. Ruth was authentically and wholeheartedly there for those in her life. Ruth as a CASA volunteer touched the hearts of the children she advocated for. Ruth also volunteered her time at the Open Door in Tehachapi. Ruth pursued a pilot's license at 75 and became a published author at 93.

Ruth was preceded in death by her husband, both of her parents; her sister, Marjorie Wyatt; her nephew, Douglas Wyatt, and her beloved dog, Pip. Ruth is survived by her son, Jerry Ingraham, his wife, Sandie, and their son, Jedd Ingraham and his wife, Veronica; their sons, Jedd, and Jaiden; their daughter, Korrie Zwanziger, her husband Adam, and their son, Callen, and daughter, Kassidy; son, Scott Ingraham; and nephews, Brad Wyatt, and his wife Deeann; and Greg Wyatt.

Wood Family Funeral Services, Inc. has been entrusted with her care. For condolences, please visit http://www.woodmortuary.net.