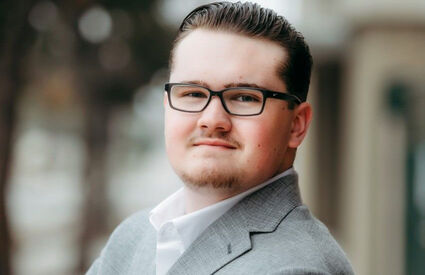 Jack Wiehn, a senior at Valley Oaks Charter School, has received a $15,000 George Beadle Scholarship from the University of Nebraska in Lincoln where he will study Graphic Design with a minor in Business Administration. Jack is also a recipient of the President's Award for Academic Excellence and the American Citizenship Award which honors graduating seniors. He is also a member of the California Scholarship Federation.

Taking advantage of Valley Oak's variety of class structures, he has chosen rigorous academic schedules each year as well as dual enrollment at Cerro Coso Community College and earned a 3.8 GPA. One of Jack's favorite quotes is, "Have no regrets on the 16th second," by Kyle Martin. He was taught the greatest lesson in life by his mom and dad that no matter what you are doing you don't have to be the best, but you must be the hardest worker. Jack will be remembered by his peers as a hard worker and someone who would be there for them if they needed help. Jack has earned the President's Award for Academic Excellence which recognizes and honors outstanding educational achievement.

With diverse interests, Jack has also been involved in a wide-variety of school and community activities, including Interact Club, Associated Student Body, VOCS choir, and Honor Choir, selected by staff to attend the KernYes Youth Leadership Summit, and performed at Open Mic. In addition, Jack volunteered at St. Malachy's church for several years, where he assists as an altar server as well as cantor and musician. When school returned to in-person learning, he stepped up and became Interact Club president and spearheaded numerous school and community volunteer service events. Jack's extensive involvement in leadership, volunteering and work experience these four years demonstrates his well-rounded life capabilities including critical thinking, communications, teamwork and management. According to Jack, "community service is about working to make your community a better place for present and future generations, no matter how small the action." He donates his time to provide music for funerals at a low or no cost and finds doing services with no monetary benefits for himself makes him a lot happier. Jack received the American Citizenship award for his school and community service as well as his positive attitude toward classmates, school and the community.

Jack is a unique high school student in that he is thoughtful before he speaks and seems to evaluate all sides of an issue before making up his own mind. COVID has negatively affected many of these students; however, Jack has come through this time with determination and strength.

"Valley Oaks Charter School is not like any regular public school. It has a more personal feel and you develop some awesome relationships with the other students and staff", said Jack.

He is currently a shift leader at Hungry Howie's. Whatever Jack is involved in, he rises to the top, because his leadership qualities stand out among his peers: responsible, fair-minded, patient and trustworthy. In addition to staying involved with service organizations in the community, Jack hopes to one day work in advertising and try to make the internet a better place for children and young adults.