Todd Lander – With the Elite 101st Airborne Division in Vietnam 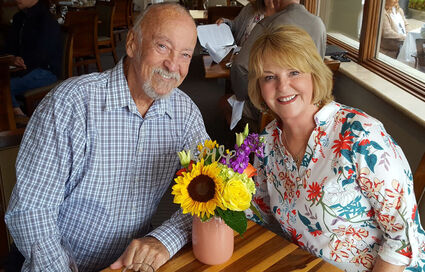 Todd and Sandy Lander on their 53rd anniversary.

(Note: This is the 19th article in a continuing series about local military veterans and their service to our great country.)

Born on Dec. 21, 1947, in Red Bluff, California, Todd was the eldest of six children. His father, from a poor family, was a truck driver and a veteran of World War II (he had somehow managed to enlist at the tender age of 15!) and the Korean War. Todd's mother was a stay-at-home mom, who, no doubt, had her hands full.

Todd's childhood was typical of so many boys who grew up in rural or semi-rural communities: "We'd go down to the creek. We spent all our time out there building forts or shooting our BB guns. We hunted; were familiar with guns. This gave us an advantage over kids from more urban areas when we went into the military."

As a youngster, Todd had a traumatic experience that left a deep impression behind. "I was about 10 years old. I was shooting my BB gun at a bird in an orchard. I wounded it. It was flopping about with a broken wing. I reflected on what Sister Mary had taught us in catechism class: 'Only humans have souls and can go to heaven. All other God's creatures cannot.' This put me in a quandary – wouldn't it be better to let the bird live, and suffer, rather than not exist at all? But I did the right thing. With my vision blurred by tears, I shot my last bird that day. I had a similar experience in Vietnam with an [enemy soldier]."

When Todd was a sophomore in high school, his family moved to the little town of Cottonwood, just north of Red Bluff. In high school Todd was on the swim team, lettering all four years (his prowess as a swimmer would enable him to save the life of a downing G.I. in Vietnam). During his senior year, he worked as a lumberjack. Graduating in 1966, Todd continued to work as a lumberjack, but after several months he realized that if he'd didn't find other work he might end up a lumberjack for the rest of his life, a future he found unappealing.

So, Todd went to Los Angeles to live with an aunt and uncle who helped him get a job. "I worked for an electronics firm. I was the supervisor for 75 women. I enjoyed it very much! That's when I met my future wife, Sandy, on a blind date."

In December 1967 he was drafted into the Army. Yet like so many young men drafted into the military at this time, Todd had no desire to be shipped off to fight in Vietnam – an alien, far away place that many Americans could not have located on a map just a few years before. Indeed, because he was a good typist, he was hoping to be assigned to an administrative position, either in the United States, Europe or Vietnam.

Basic training and advanced infantry training (AIT) both took place at Fort Lewis, Washington. In basic, in recognition of his leadership skills, Todd was made a squad leader. He was also at the top of his class in AIT. "Once I realized I was going to be in the infantry," he said, "I took the training quite seriously. I realized that my survival would depend on who was better prepared, me or the enemy." In fact, by the time Todd had completed basic training and AIT, he had undergone a major attitude adjustment: "I was now so 'gung ho.' They sent a recruiter for paratroopers out to Fort Lewis and I said, 'that's for me!'"

Todd did his paratrooper training at Fort Benning, Georgia. "One of the interesting things [about Ft. Benning] was a young priest who was there. He had this big long scar down the right side of his face. His slogan was 'get your ass to Mass!' He referred to God as the 'commander-in-chief.' We Catholic guys really ate that up. He was part of the airborne training staff. He gave me a rosary that I took with me to Vietnam."

On leave in June 1968, Todd and Sandy were married. Twenty-one days later he arrived in Vietnam as a Private First Class (PFC). After a week of in-country acclimation training, he was assigned to the elite and historic 101st Airborne Division, with its big "Screaming Eagle" divisional patch. "We started out in III Corps sector, north of Saigon. It was all rice paddies and little Vietnamese villages. Most of the fighting we did was with Viet Cong [guerillas]."

Todd was tasked as the radio telephone operator (RTO) for the first sergeant in "Charlie" Company, 2nd Battalion, 506th Regiment – a position he would hold for barely two weeks. "On my first night in the field," he recalled, "we went on a night assault. That was highly unusual, for in Vietnam it was rare to conduct aerial assaults at night in our [UH-1] Huey helicopters. It was a hot LZ [landing zone]. The Viet Cong were shooting at us with seven 51-caliber machine guns, and that really got my attention. But we came through that pretty well. I jumped several feet out of the helo and landed flat on my back due to the weight of the rucksack. My sergeant for whom I was RTO said to me, 'welcome to Vietnam, Lander.'"

During his initial days in the field, "Charlie" Company maintained close contact with the enemy. He witnessed the first deaths of his fellow G.I.s. "One of those killed was a medic. We were behind a dirt berm; he was working on a good buddy of mine. Then someone yelled for a medic, so he rolled out from behind the berm, began to pull himself up and was shot in the head. I watched him die, then I was ordered to [salvage his body]. So I crawled out with my head to the ground. I grabbed his collar, had his blood and brains on my hands, but I dragged him back in."

The battle raged on. Dead and wounded G.I.s were being brought in. As RTO, Todd was making phone call after phone call to different units when, suddenly, his mind went blank. He couldn't recall any of the frequencies. So his first sergeant took over the radio. It had been a brutal baptism of fire for PFC Lander.

Todd was reassigned as a "grunt" to an infantry platoon in "Charlie" company. He spent three months in Cu Chi province, among the rice paddies, fighting and, whenever possible, trying to grab some precious sleep. "Anytime we went into a village we'd have contact with the enemy. We all had trench foot. The mosquitoes were horrific. We'd pull the leeches off our bodies. I went 45 days without a bath or a shower."

"Charlie" Company then went north, to I Corps sector, operating out of Camp Evans north of Que (it was now late 1968). Here the terrain was dramatically different – jungles and mountains – and they were now in combat largely against North Vietnamese Army (NVA) regulars, who were better trained and equipped than the Viet Cong (although, as Todd conceded, the Viet Cong "were also very effective, and we grew to respect them").

The weather was cold and wet, and "Charlie" Company's task was to find and eliminate the NVA and their bunker complexes in what were often costly "search and destroy" missions. "We'd be out in the field for 30 to 40 days at a time before we'd return to Camp Evans for a 'stand down.' Then we'd go back into the field again. No one liked the 'stand downs.' We'd get a shower, fresh clothing, socks and boots. We'd also get hot meals and a chance to sleep. But we had to pull 'KP.' We had to burn excrement with kerosene. We basically had to take over the jobs of those at the camp, so they'd get a break!"

Todd would lose two dear friends fighting in I Corps sector. "We were in the Ashau Valley (not far from 'Hamburger Hill' [the site of a bloody battle in May 1969 between the 101st Airborne and North Vietnamese regulars]). The worst part of Vietnam was the terror, the fear. Most of my buddies died near the end of my tour, between May and July 1969, after I'd gone on leave to Hawaii to visit Sandy. Some 26 boys died in my company in the year I was there."

Yet even during the bleakest of times, he was sustained by his bedrock faith in God and his desire to make it back to his new bride.

Todd returned to the United States in July 1969. He was temporarily assigned to the 82nd Airborne Division before being mustered out of the service just before Christmas.

Todd and Sandy, and eventually their two boys, made their lives together in southern California. Todd went to work for a finance company for a couple of years before joining the Los Angeles County Sheriff's Department in 1973 at age 25. He would make a career with the Sheriff's Department, traveling throughout the country teaching classes (some of which he'd developed himself) on law enforcement. He retired at age 55.

Like so many Vietnam veterans, Todd has also struggled with PTSD. To work through his feelings, and to honor those with whom he served, he published his memoir in 2020. "It took almost 25 years to write. I did a lot of research. I'd be at the keyboard and tears would run down my face. What's unique about my book is that it really lets you know what it was like in Vietnam. One of the payoffs is that I've been contacted by family members of those veterans who served with me but have passed on, giving them closure."

Todd's award-winning book, "Bound by War: A Memoir of Love, Friendship and Survival," is published by virtualbookworm.com.