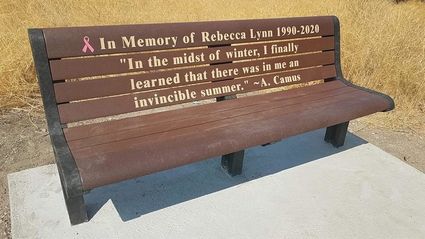 The best known stories often begin with a birth, and ours is no different – it began when Rebecca Lynn was born on August 20, 1990.

Although she was born in Salinas, California, Rebecca was raised in Tehachapi for the majority of her life, where she attended school, worked and later raised her daughter, Delilah.

A single-mother, Rebecca was diagnosed with breast cancer, several months before her 26th birthday in 2016. After bravely fighting it for several years, without complaint, she lost that arduous battle on January 23, 2020. She was only twenty-nine, at the time.

But our story doesn't end there.

For those that may have recently seen an unfamiliar bench at the end of Freedom Trail at Meadowbrook Park, it stands as a testament of Rebecca's perseverance, to commemorate her unwavering strength, courage and undying love and hope for humanity. It was there, in that cul-de-sac, that Delilah learned to first ride a bike, where she enjoyed watching wildlife or an occasional train with her best friend, her mom. It was a special place for both mother and daughter, and we want to share it with you, too.

Carved upon the bench itself, you will see an Albert Camus quote favored by Rebecca. Whether it is her daughter, Delilah, that sits atop it and reflects on good times she had with her mother, or a lone stranger that sits on it, we wanted a message that might resonate with everyone, a message that bestows a sense of comfort and strength and courage, even in the worst of times; a place to reflect on hopes and dreams, even amidst a metaphorically bleak winter.

With Breast Cancer Awareness Month in October, we wanted to sincerely thank the Golden Hills Community Service District for approving our request to install the bench at Meadowbrook Park in honor of Rebecca Lynn, as well as all the love and the support that we received to make it a reality.

Cancer is an indiscriminate disease that inflicts both young and old alike. Be it pursuing your dreams and aspirations, simply calling a distant relative or making amends with an old friend, or merely picking up a new hobby, or getting a mammogram, please do not put off until tomorrow what you can do today. We only get one chance to make the world a better place, and it begins within each of us.

If you would like to donate to a cause for helping breast cancer survivors with mammograms, wigs and to spread the word, please consider donating to Links for Life at http://www.linksforlife.org and The Young Survival Coalition at http://www.youngsurvival.org.