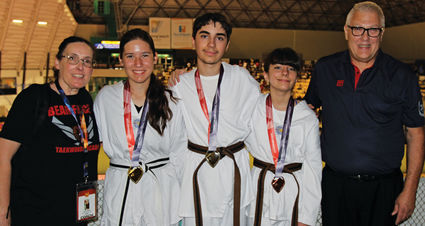 Since this was the first tournament for each of the athletes, there was excitement to be had. Master Darren Sauro and Coach Caryn Sauro gave last minute guidance and words of encouragement before the start of competition. As the groups were called, Coach Caryn guided the team members to the correct ring.

Each athlete performed in the Poomsae portion of the tournament. In this portion, each athlete demonstrated how well they could execute their "Taeguek" forms, a series of Taekwondo skills that each athlete must learn to advance in belt level. The difficulty increases with each new belt.

In the 18 to 30-year-old division, for her performance of Taeguek Il Jang, Angela Rodriguez was awarded a Gold Medal.

In the 15 to 17-year-old division, for his performance of Taeguek Yuk Jang, Harley Davis was awarded a Silver Medal.

In the 12 to 14-year-old division, for her performance of Taeguek Yuk Jang, Katherine "KD" Davis was awarded a Bronze Medal.

At the referee's dinner following the competition Master Darren Sauro was awarded the Referee Leadership Award. This award recognizes excellence in refereeing, ring management and scoring.