A trip back in time

Union Pacific is celebrating the 150th Anniversary of the Transcontinental Railroad's completion by touring its historic Big Boy steam locomotive No. 4014 throughout the U.S.

According to the UP website, "The Big Boy's return to the rails is the product of more than two years of meticulous restoration work by the Union Pacific Steam Team. No. 4014 is the world's only operating Big Boy locomotive."

I was able to enjoy a viewing of the No. 4014 in Yermo, Calif. As I did, I was transported back to the days when the mighty steam locomotives were running the rails. It was a wonderful sight to see this monster locomotive operating and being worked on. I got to meet Union Pacific Senior Manager of Heritage Operations, Ed Dickens, in the cab of UP Big Boy 4-8-8-4 No. 4014. Mr. Dickens is also the engineer of the Big Boy and was super knowledgeable and personable to me and all the fans of the Big Boy. I asked him if the Big Boy will ever run up to Tehachapi and through the Loop. He said, "no problem; the locomotive can do the radius." This is fantastic to know and something great to look forward to in our community.

For me this is like seeing the "Spirit of St. Louis" aircraft, the one that Charles Lindbergh piloted to Paris, France or the Wright Flyer. Both of those are in the National Air and Space Museum in Washington D.C. and frozen in time for posterity. Not the case with the Big Boy.

I also talked with some of the crew. Dean Anderson drove the fuel oil truck that refuels the Big Boy and is one of the nine full time crew and many volunteers working on the Big Boy year round. They use recycled motor oil from cars. It's filtered seven times and works fantastic, Mr. Anderson was telling a crowd of fans. I love this "waste not, want not" attitude. Mr. Anderson said the carbon left in the oil from the usage burns well; lots of BTUs. A BTU is equivalent to approximately 1055 joules (or 1055 watt-seconds). Mr. Anderson was great to talk with and friendly to all. The Big Boy uses about 30 gallons of fuel oil and 100 gallons of water per mile.

This Big Boy (4014) locomotive is restored back to its prime, brand new and has been converted to an oil burner. Originally, the Big Boys were coal fired due to the area they worked in. They pulled the heavy coal trains in the east for many years. It was common that steamers that operated in the west used fuel oil back in the day due to the fact that there were large oil reserves in the west. No. 4014 was originally built and started operating Nov. 1941. In 2013, a complete restoration was started and preservation was done by the Historical Society from 1962 to 2013 at the Fairplex in Los Angeles County Fair Grounds, Pomona, Calif. 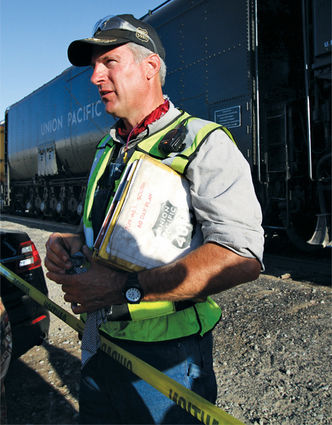 The Big Boy steamer is an articulated 4-8-8-4 locomotive made by American Locomotive Company between 1941-1944 and operated by Union Pacific until 1959. The locomotive had to be articulated, essentially hinged, so it could navigate curves and is why we will see this mighty locomotive someday here in Tehachapi, Calif.

Today only seven out of 25 produced locomotives are around on static display. The eighth has been restored fully operational and is touring the western U.S. right now. For more information, go to http://www.up.com. Thanks to Sr. Sup. Division Police Antonio M. Paz in Yermo, Calif., and Tim McMahan, my media contact: WA, OR, CA, NV, NM, AZ Corporate relations for full access to the locomotive.