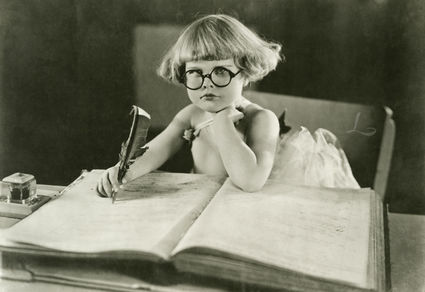 "What?" Danny responded, looking mildly annoyed.  Danny turned his attention to Wade to submit his inflection of disapproval; Wade did not receive that angry glance, he was looking past Danny toward the entrance.

Danny wasn't a clairvoyant, or even mildly intuitive, but without turning to look, he already knew that the Chief was standing at the doorway.  "He's behind me, isn't he?" Danny said ironically, smiling at Wade uneasily.

"Hi Chief," Danny said as he swiveled his chair around; the hinges cursing with pain under his weight.  Chief Tyson stood in the doorway, leaning heavily against the frame. His arms were crossed and rested precariously on his large belly.  The men called him 'Tyrant Tyson,' and with good reason.

"When you're done with your nap, maybe you can do some actual police work. We only have twenty-four hours to hold this mute until the FBI takes him.  Get in there and find out what happened on that damn trail." Tyson was in his early fifties and completely bald except for two small patches of hair on either side, which recessed back into his head little by little each year.

Sergeant Josephs considered a rebuttal, but instead kept the words sealed behind his tight lips, which smiled awkwardly down at Tyson as he squeezed by.  Josephs knew from experience how to avoid Tyson's wrath.

"Come on, Wade," Josephs said from around the corner as if calling for his disobedient dog.

"I'll take lead on this one, Corporal," Josephs said as he opened the door to the interrogation room.

The room was dimly lit by a shop light that hung unevenly from the ceiling. In the center of the room was a small metal table pockmarked with indentations from years of angry fists slamming into it.  Two chairs sat facing each other from opposite ends, both were empty.

In the corner of the room was a young man pressed so deeply into the crease of the corner that he resembled a tight ball of laundry.  The air was unnaturally humid. There was an almost inaudible whimpering noise coming from the man.

Wade and Josephs looked at each other with lines of confusion stitched in their brows.  Josephs nodded at Wade and Wade cautiously walked over to the man to help him to his feet.  As he got near, the man screamed, stopping Wade in his tracks. Wade peered back at Josephs with fear in his eyes.

"We don't have time for this, get him in the chair."

Wade took a deep breath and knelt beside the man.

"Sarge, you need to have a look at this, there's black stuff all over the ground here."

"The lights, don't look into the lights," the man said, his voice shaking.  Suddenly, the man lurched and yelped in pain as he vomited a thick black liquid onto the floor.

Wade and Josephs looked at each other and this time it wasn't only Wade who looked terrified.