Surrounded by mountains: Peaks of the Tehachapi area 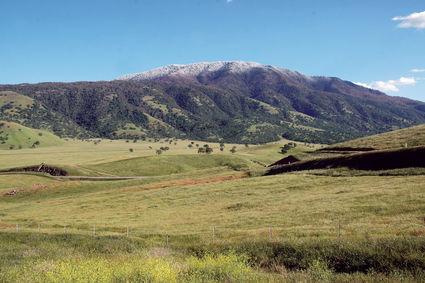 The Tehachapi area is defined and delineated by its mountains. Valleys in the Tehachapi Mountains tend to be bowl valleys, ringed by mountain ridges on all sides, rather than open ended V-shaped notch valleys. Our mountains surround us, they help determine our weather and they are a perpetual and comforting backdrop to our lives.

It can be confusing to visitors or newer arrivals to know the names of the larger, more distinctive peaks in our area, so here is a profile of some of the more notable ones. This is only an introduction – chapters could be written about each of these sturdy, familiar mountains.

Interestingly, I can't give you summit elevations that are guaranteed to be universally accepted as accurate. Why? Because the U.S. Geological Survey, the sole science department and measuring service of the Department of the Interior, doesn't have official summit elevations for most mountains – even for world-famous peaks. Mt. Rainier in Washington, for example, is listed by the Land Surveyors Association of Washington as having an elevation of 14,411-feet, by the USGS at 14,410 and by the Smithsonian Institution at 14,409-feet.

It turns out that the USGS isn't particularly concerned what the exact elevation is for mountains – this figure doesn't have much impact on surveying. Most USGS elevation measurements have a margin of error that's plus or minus five feet, so there's a potential 10-foot swing right there.

Topographical maps issued by the USGS have contours at 40-foot intervals, so unless peaks happen to be exactly on a line, the topo map will only indicate that the summit is within a 40-foot band. And small hand-held GPS units aren't much use – they tend to have accuracy only within 30 meters or about 100-feet, which is even less precise. Highly accurate GPS units have receivers the size of a suitcase and aren't going to be found in anyone's pocket. Typical altimeters aren't very reliable either, because they are based on barometric pressure and are also affected by humidity and temperature, so they can give a different reading each day at the exact same spot.

And even the baseline from which elevation is calculated – sea level – is a subjective, moving target, because the ocean's surface rises and falls depending upon gravitational pull. When you couple these ocean variations with seasonal temperatures, which can cause the mountains themselves to expand or contract, adding or subtracting a foot or two to the elevation, you can see that establishing a precise elevation for the summit of a mountain is a difficult and sometimes controversial task. No wonder the USGS isn't particularly interested in establishing official heights for mountains.

At some distant future date there will no doubt be small but accurate sensors imbedded at the top of most mountains, providing a continuous elevation reading wirelessly. But that day is still far off at this point.

One more issue I should mention – I would love to be able to say that there is a public access hiking trail leading to the top of each of these mountains, but that isn't the case. I hope that public access can one day be negotiated or purchased from landowners, but for now most of these summits are largely on private land with limited access.

Remember, the elevations given are subject to debate and you may encounter substantially different totals when researching these comely mountains. If someone attempts to correct you and insists on a different elevation than one you've heard, just smile and nod knowingly.

The top of this peak is considered by some to be the tallest point in the range, and it is sometimes confusingly referred to by non-residents as "Tehachapi Mountain." Others consider Double Mountain to be the highest point in the Tehachapis. On topographical maps, Tehachapi Peak is within the 40-foot contour band just below 8,000-feet, meaning it is between 7,960 and 7,999-feet. Viewed from many places in the Tehachapi Valley, it does have a nicely pointed, symmetrical peak.

How to see it: Tehachapi Peak rises up above town to the south. If you are driving south on Tucker Rd. approaching the intersection with Valley Blvd. (Highway 202), look up – the shapely mountaintop in the distance is Tehachapi Peak.

This twin peak is only about a mile south of Tehachapi Peak, and isn't very prominent from the Tehachapi Valley – it is one of the least visible of the major mountains in our area. It is approximately seven air miles south of the City of Tehachapi. The USGS first "monumented" the peak in 1926, cementing a USGS bronze disk in a drill hole in bedrock on the most westerly of the two knobs on the summit. There are several communications towers on the easterly summit. The reported elevation of this mountain, like many others, varies: some records list it as 7,993-feet, which would make it the tallest point in the Tehachapis. Double Mountain, Tehachapi Peak and a third peak slightly farther south called Covington Mountain are the three high points of a crest along the backbone of the Tehachapi Mountains.

How to see it: Double Mountain is actually more visible as you approach Tehachapi from the desert on Tehachapi-Willow Springs Road than it is from within the Tehachapi Valley. It is slightly south of Tehachapi Peak, with just a forested saddle separating them.

This big round-shouldered mountain is the main peak overlooking Cummings Valley, and it looms southeast of Stallion Springs. Snow often remains for weeks on its largely bare summit.

It was named for area pioneer George Cummings, and like most of the taller mountains in the area, it was logged in the 1860s and 1870s and occasionally since then. It is tallest on its eastern side, and then slopes evenly down to the west in a long steady incline.

The mountain and surrounding slopes have been used for cattle ranching and hunting, and are home to California Mule Deer and wild pigs.

How to see it: From the City of Tehachapi, look southwest and you can't miss the big ramp-shaped mountain with a mostly bare, rounded top. From Cummings Valley and Stallion Springs, look southeast – it is the dominant geographical feature.

This distinctive mountain looms over the southeastern corner of the San Joaquin Valley, dominating the town of Arvin that sits against its western flank. It physically resembles the hump-backed shape of a California grizzly bear as you approach from the west on Highway 58, but it was named not for its appearance but for now-extinct grizzlies that once lived on its forested slopes.

Bear Mountain is the most occupied mountain on our list, since the southern side forms the border of Bear Valley and was developed for homesites as part of the Bear Valley Springs development in the former Fickert Ranch.

Bear Mountain is beautiful, both from a distance and up close, with Ponderosa and Jeffrey Pines on its wooded summit, though pine bark beetles have taken a toll in recent years. Every winter it gets some pogonip, which is basically frozen fog that builds up in layers on trees and other exposed surfaces.

This is the smallest mountain on our list (not the lowest though), but it is very recognizable with its pleasing symmetrical, rounded lens shape. Sugarloaf got its name in the late 1800s, when snow was more plentiful, for after a snowstorm its smooth, mostly treeless southern flank does resemble a kind of sweet bread from a bakery, dusted with powdered sugar. In the 1930s and 40s, Sam Cuddeback and Bob Freeman raised free-ranging goats in Sand Canyon and they browsed the slopes of Sugarloaf. Bob said he was always told that black bears hibernated in winter on the shady, more wooded northern slope of Sugarloaf.

How to see it: Look to the north when you're east of the City of Tehachapi, between Monolith and Sand Canyon, and you can't miss the singular, smooth rounded shape of Sugarloaf Mountain. After a cold storm, when the steep flat south-facing slope of Sugarloaf is covered with a layer of bright white snow, you can see why early settlers chose the name.

This iconic mountain forms the western wall of the Tehachapi Valley and looms over West Golden Hills. Nuwä (Kawaiisu) Indian people called this mountain Togowa Kahnhi, which basically means "Place Where Rattlesnakes Live" or "Rattlesnake House." Interestingly, the largest canyon on the southern portion of this mountain is called Rattlesnake Canyon, so it appears that both Native Americans and later settlers both encountered rattlesnakes here. Locals sometimes call it "Sleeping Indian Mountain" because of the silhouette of an Indian man's face that can be seen from certain angles. This outline was recognized by the Nuwä who considered it a gift from Tugu-bayev Karid Imi – the Creator. Black Mountain blocks the prevailing westerly winds for those living on its lower eastern slopes, though it also blocks the setting sun earlier than in the rest of the valley and shortens winter days. 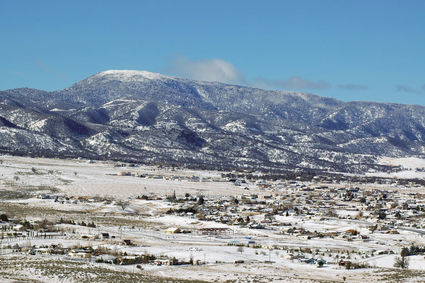 How to see it: If you're in the Tehachapi Valley, turn until you're facing west, and you're looking right at Black Mountain. The Indian face is the highest point, on the northern portion of the ridgeline. The best places to see the silhouette are in the vicinity of Schout Road and Jeffery Road, when you're south of Black Mountain looking back toward the north. It isn't very noticeable from the Tehachapi city limits.