A weird and wordy luncheon 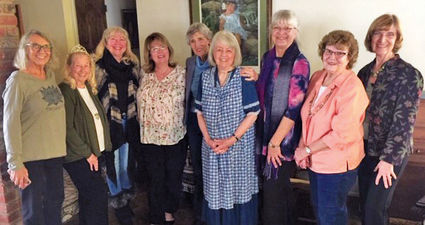 A weird and wordy gourmet luncheon was held in Tehachapi on Feb. 20. The theme was WORD ORIGINS and each guest was asked to bring a word and explain its origin along with a dish corresponding to the word selected. Stories were written by guests using all the words submitted.

A story-writing contest was held and won, hands down, by creative Jo Walker who used ALL the words brilliantly!

A scavenger hunt for coins took guests throughout the house and even onto the front porch. Heavy snow was falling so one of the locations had to be moved from a snow drift! The hunter who found coins of the greatest value was Mary Noble but she was disqualified due to unfair family connections! The deserving winner was announced and it was Edna McCallion!

My Story by Jo Walker

When I woke up one morning a couple of weeks ago, I was surprised and thrilled to see my world had been transformed into a beautiful fairyland. Everything was covered in white . . . a gorgeous snowfall.

Something about the snow makes me feel ebullient, it almost acts like an aphrodisiac on me. Now if I only had a partner to share those feelings, but at this time of my life that's just an hilarious fantasy. But still, I could enjoy the snow, so I put on my gaudy snowsuit and went out and made snow angels.

The next day I looked out the window and hmmph . . . more snow. Not quite so much fun today. I really had places I wanted to go but I was stuck inside. Oh, well! Good day for some baking. I got busy and it wasn't long before the essence of the piquant peach cobbler I was making smelled like ambrosia and cheered me right up.

The next day when I checked outside and saw more snow, I was less than thrilled. C'mon, this is getting to be an hyperbole. I'm chilled to the bone and really tired of snow. It's a mystery to me where it's all coming from! Maybe the word I am looking for is lethologica!

The next day I woke to glorious sunshine. I could only fall to my knees and say "Namaste." Which means, sunshine, I bow to you.