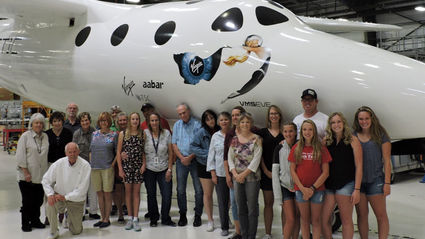 On a recent Saturday morning, the Tehachapi Mountain Branch of American Association of University Women (AAUW) sponsored a tour of The Spaceship Company (TSC) and Virgin Galactic (VG) in Mojave. AAUW members and their families, as well as two of our Tech Trek families, participated.

The tour took place in the FAITH hangar, where final assembly and testing of the aircraft takes place. Our very knowledgeable tour guide Katie Westley, who is a Tech Writer for TSC and leads their community outreach program Galactic Unite, answered questions relating to all facets of the program.  She also explained the company’s purpose: to transport civilians into space in the very near future, via the mothership (VMS Eve - which we are standing in front of) and a spaceship (VSS Unity - not pictured).

VMS Eve acts as the first stage of the launch, taking VSS Unity up to approximately 50,000-feet. VSS Unity is then released, lights her hybrid rocket motor and propels up to suborbital space. There are currently over 600 people signed up for the trip from all around the world, who have paid $250,000 each for the opportunity. Richard Branson, Founder of the Virgin Group, his wife and two children are scheduled to be the first passengers once TSC and VG have completed their flight test program. They just completed an additional powered test at the end of July, bringing them another step closer to commercial service.