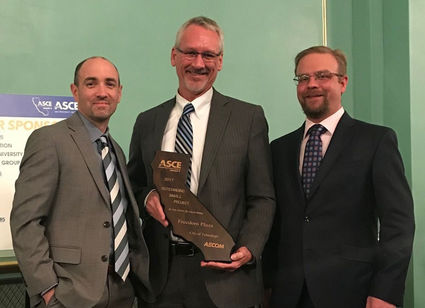 Pictured left to right: Jay Schlosser and Greg Garrett representing the City of Tehachapi, and Dan Cronquist from AECOM.

Tehachapi's Freedom Plaza and Visitor's Center, already a recipient of three regional awards by the American Society of Civil Engineers and the American Council for Engineering Companies, was recognized on March 23 with another award at the State level.

"The American Society of Civil Engineers is both the largest and most prestigious civil engineering group in the United States. This award from Region 9 of the ASCE represents the highest award in our category for the State of California. The City is very honored that the ASCE recognized our little town for this distinction and we certainly feel like Freedom Plaza speaks volumes about what we value in this community," said Jay Schlosser, Development Services Director.

Freedom Plaza has earned the distinction as "Small Project of the Year" for ASCE's Region 9, which covers the State of California.

The awards for Freedom Plaza now include:

Freedom Plaza opened in 2016 and features the Tehachapi Visitor's Center, which is staffed by volunteers, as well as the Freedom Plaza, which includes monuments for all five branches of the armed forces. It is located on the corner of Tehachapi Boulevard and Curry Street.