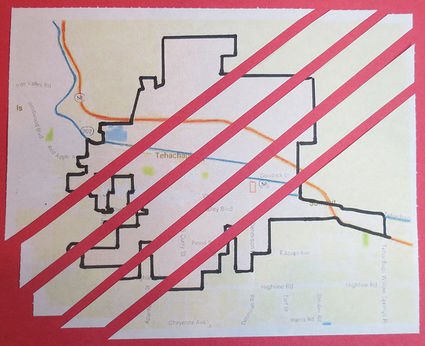 Where is your piece of Tehachapi? This graphic is a symbolic representation of the forthcoming division of the city of Tehachapi into five demographic sections under the City Council election district system. The National Demographic Corporation of Glendale will study the city and recommend appropriate boundary lines for the new districts. The five councilpersons must live in the districts they represent. The people who live in a given district can vote only for the candidate who lives in the same district and no other candidate. As an example, if a voter who lives in a district that, hypothetically, has been carved out north of the railroad tracks wants to vote for Ed Grimes (who lives farther south, most likely not within a newly created district where the voter lives), that voter cannot cast a ballot for Ed Grimes or any candidate from the other four districts. Hwy. 58 and rail tracks are shown.

In an analysis of the amended California Voting Rights Act, Marguerite Mary Leoni and Christopher E. Skinnell, writing for the League of California Cities, cite the cities of Dinuba (population 23,961, Tulare County) and Santa Paula (population 30,335, Ventura County) as examples of "small jurisdictions" that underwent federal voting rights litigation. The city of Tehachapi, now on an accelerated track to switch from an at-large to by-district City Council election process to satisfy a voting rights challenge, logically might come under a "mini-city" category.

Tehachapi's population is approximately 9,000. If one includes the population of the California Correctional Institution, which the city annexed and which is 11 miles from the city proper, the population rises to roughly 14,000 (the prison population fluctuates daily). City special counsel Youstina Aziz of the firm Richards, Watson & Gershon said at the Sept. 18 City Council meeting that the prison population will not be counted in determining the new election districts, as the inmates cannot vote.

According to the Kern County Registrar of Voters, currently 4,355 active voters live in the city of Tehachapi. A total of 5,107 residents voted in the last general election, on Nov. 8, 2016, for four City Council seats. The seeming anomaly in numbers arises from the non-static nature of the voter rolls, as the numbers change constantly. The Kern County Registrar of Voters office said that as of Sept. 26, a cumulative 2,654 Tehachapi residents have cancelled their voter registrations. They either moved or simply are not registered any more. An additional 606 are on the inactive list, a result of undeliverable mail to the voter's address.

Kern County Elections Process Supervisor Sara Webb said that in Kern County, only the city of Bakersfield has election wards, and "all the other incorporated cities in Kern County are at-large."

The city of Tehachapi has hired Dr. Justin Levitt, vice president of the National Demographic Corporation, to divide up the city into five legally acceptable "nearly equal" sections of population. If the active voters were divided equally (not a requirement under the legal criteria for establishing districts), each district would have 871 voters. 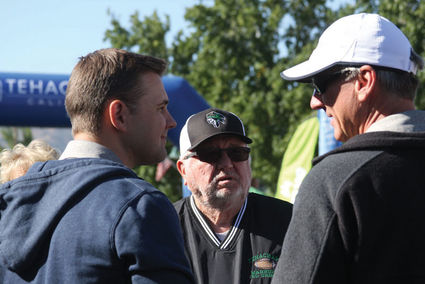 In the by-district system, candidates must live in the district he or she represents. Voters can cast ballots only for the candidate from their district and cannot vote for any of the other candidates. If there is only one candidate running from a given district, that candidate will win automatically. If no candidate steps up from a district to run, the City Council will appoint a person from the district to serve in that seat, or the position will go vacant, leaving the voters of that district with no representation and no control over who else sits on the Council.

The next public hearing on the process, featuring draft maps of Council districts, is 6 p.m., Oct. 9 at Wells Education Center board room , 300 S. Robinson. 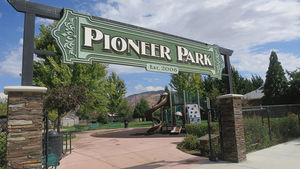 The city of Tehachapi’s charming and manicured Pioneer Park, located on I Street, north of the railroad tracks. The city opened the park in 2006 to serve the neighborhood. The park includes a playground structure, basketball court, picnic tables and lots of shade trees.