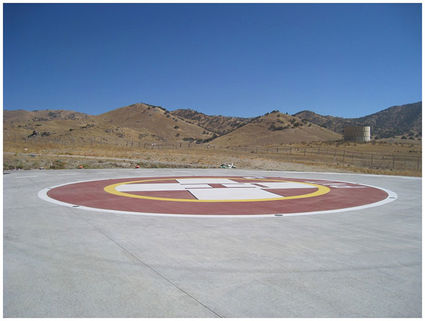 The heliport at the Replacement Tehachapi Acute Care Hospital at Capital Hills awaits FAA approval. A short curved road down the hill connects the heliport to the north side of the hospital, where the emergency entrance is located. The hills in the background are on The Loop Ranch.

The ceiling tiles of the Tehachapi Replacement Acute Care Hospital are laid in, and that's a good milestone, Senior Project Manager Lisa Polansky of SHP Project Development, the hospital project manager, told the Tehachapi Valley Healthcare District board of directors.

"It means that the overhead utilities are signed off," she said.

The complex labyrinth of pipes, conduits and wires above the ceilings are as deep as the walls below, she said. Covering them up means a tough job has been accomplished.

She said the installation of doors is another step forward, as the air flow can be tested and balanced. Terazzo flooring has been installed in the dining room and the pre- and post-op floors are covered. 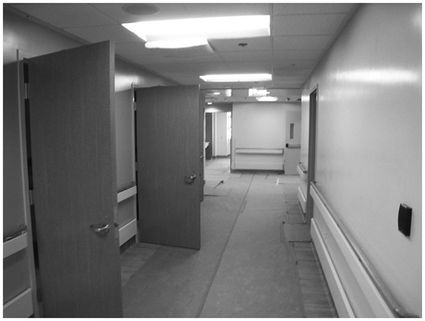 Inspections for the heliport and water tank were scheduled.

Chief Financial Officer Chet Beadle reported that the existing hospital's cash margins are "ahead of both state and national critical access hospitals." The district collected $1.4 million in July. He said the district will use all its reserves before receiving construction reimbursement from its new affiliate Adventist Health. The district paid $2.7 million in July for hospital construction from the district's reserves and hospital coffers. The $65 million in bonds was used up before July, he said. District CEO Eugene Suksi told Beadle "You and your team are doing a miraculous job stretching funds for construction."

The board met at the Golden Hills Community Services District on Sept. 20.