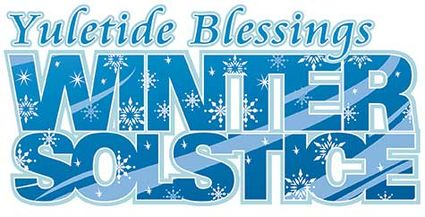 Late dawn. Early sunset. Short day. Long night. For us in the Northern Hemisphere, the December solstice marks the longest night and shortest day of the year. Meanwhile, on the day of the December solstice, the Southern Hemisphere has its longest day and shortest night. This special day is coming up on Tuesday, December 22 at 4:48 UTC (December 21 at 8:48 p.m. PST). No matter where you live on Earth's Globe, a solstice is your signal to celebrate.

Day and night sides of Earth on the December 2015 solstice

When is the solstice where I live?

The solstice happens at the same instant for all of us, everywhere on Earth. In 2015, the December solstice comes on December 21 at 10:48 p.m. CST. That's on December 22 at 4:48 Universal Time. It's when the Sun on our sky's dome reaches its farthest southward point for the year. At this solstice, the Northern Hemisphere has its shortest day and longest night of the year.

Earth has seasons because our world is tilted on its axis with respect to our orbit around the Sun.

What is a solstice?

The earliest people on Earth knew that the Sun's path across the sky, the length of daylight, and the location of the sunrise and sunset all shifted in a regular way throughout the year. They built monuments such as Stonehenge in England and Machu Picchu in Peru to follow the Sun's yearly progress.

But today we see the solstice differently. We can picture it from the vantage point of space. Today, we know that the solstice is an astronomical event, caused by Earth's tilt on its axis and its motion in orbit around the Sun.

Because Earth doesn't orbit upright, but is instead tilted on its axis by 23-and-a-half degrees, Earth's Northern and Southern Hemispheres trade places indirectly receiving the Sun's light and warmth. The tilt of the Earth and not our distance from the Sun is what causes winter and summer. At the December solstice, the Northern Hemisphere is leaning most away from the Sun.

At the December solstice, Earth is positioned in its orbit so that the Sun stays below the north pole horizon. As seen from 23-and-a-half degrees south of the equator, at the imaginary line encircling the globe known as the Tropic of Capricorn, the Sun shines directly overhead at noon. This is as far south as the Sun ever gets. All locations south of the equator have day lengths greater than 12 hours at the December solstice. Meanwhile, all locations north of the equator have day lengths less than 12 hours.

For us on the northern part of Earth, the shortest day comes at the solstice. After the winter solstice, the days get longer, and the nights shorter. It's a seasonal shift that nearly everyone notices.

Around the time of the winter solstice, watch for late dawns, early sunsets, and the low arc of the Sun across the sky each day. Notice your noontime shadow, the longest of the year.

Where should I look to see signs of the solstice in nature? Everywhere.

For all of Earth's creatures, nothing is so fundamental as the length of daylight. After all, the Sun is the ultimate source of all light and warmth on Earth. 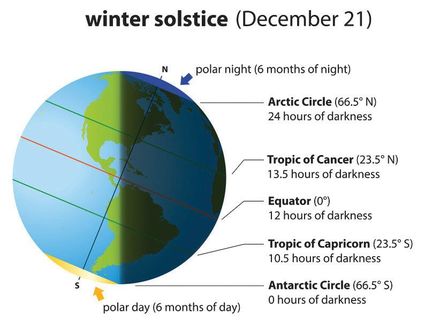 If you live in the northern hemisphere, you can notice the late dawns and early sunsets, and the low arc of the Sun across the sky each day. You might notice how low the Sun appears in the sky locally at noon. Be sure to look at your noontime shadow. Around the time of the December solstice, it's your longest noontime shadow of the year.

In the Southern Hemisphere, it's opposite. Dawn comes early, and dusk comes late. The Sun is high. It's your shortest noontime shadow of the year.

And so the cycle continues.