Locals jumping into the pool for the first time since 2019.

What began as a grassroots effort to save a swimming pool, has ended in a celebration of vision, partnership and hard work. On Friday, Oct. 21, a triumphant group of school leaders, community volunteers, business partners, government officials and local school children met at the Boron High School Swimming Pool to cut the ribbon and declare the pool "open!"

The swimming pool, owned by the Muroc Joint Unified School District (MJUSD), hit hard times during COVID. Like the schools themselves, the pool was closed for months. The sun and dry winds were hard on the pool's structure resulting in cracks, dirt and fungus on the pool bottom.

"After nearly 50 years of life, the Boron High School pool had reached the end of its life cycle. Without adequate funding for the pool, the district was considering the possibility of closing the pool indefinitely," said Kevin Cordes, MJUSD superintendent. "Thankfully, Rio Tinto committed to match every dollar raised in the community. The town pulled together, and with some extra help from a state grant, the money was raised, and construction could begin."

Help was needed, that's when Rio Tinto stepped in.

"The community asked for help, so we rolled up our sleeves and partnered with the school district to help oversee the pool renovation," said Ryan Harnden, Chief Operating Officer for Rio Tinto U.S. Borax.

In addition to donating matching funds, U.S. Borax contributed staff time and skilled trades to get the job done.

"We know the pool is important to the community. It's a gathering place in the summer and a way to cool down when the temperature heats up. We recognize the significance, so we had to help," said Harnden.

Jerry Gallegos, a key community volunteer, added "we partnered with Boron Alive, to accept monetary donations. We asked everyone we knew if they would contribute. We sold raffle tickets, taco dinner tickets and created a campaign using social media. People, from all over the country, sent us cash and checks. It was amazing."

"It's an excellent example of a successful public-private partnership. The right people, including my District Director Laura Lynne Wyatt, came together to restore the pool, but they did more than restore ... they transformed the pool. Great job everyone," he said.

In the beginning, the team had doubts as to whether they could collect but a few thousand dollars, but when they hit 20-grand, they knew they were on to something. They received donations from a few coins to $5,000. Every donation mattered and was carefully counted. 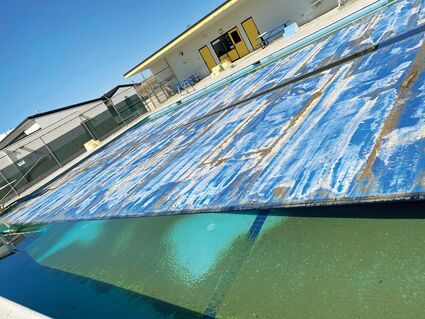 The pool before work on the renovation started.

"People donated with coins, cash, checks, credit cards and in-kind goods and services. It was given in person, through the mail and online. Together, we made this happen," continued Gallegos.

The swimming pool was built in 1972. It has been maintained and operated by the school district for decades.

"After 50 years of continued operation, the Health Department wouldn't let the pool re-open without repair," said Dr. Cordes. "The money restored the pool but wasn't enough to renovate the restrooms – so Rio Tinto U.S. Borax came in with additional resources and got it done. They have been an amazing community partner."

The pool will open for a special swim day on veterans Day (Nov. 11) but is scheduled for a grand re-opening next spring with a slate of activities for everyone.