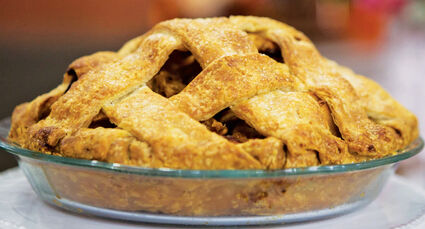 Do you make a wicked apple pie? Enter The Loop newspaper's Apple Pie Baking Contest, which takes place on Sunday, Oct. 16 at 1 p.m. on Green St. just outside of Centennial Plaza in Tehachapi. Let's see how your recipe fairs against up to eight other bakers. Here are the rules.

1. The contest is open to anyone wishing to bake an apple pie.

2. Only eight apple pies will be accepted, with a $10 entry fee.

3. All apple pies will be accepted.

4. Pies MUST be checked in at the Apple Festival Organizer's booth at the Centennial Plaza stage on S. Green St. by 11 a.m. on contest day (Oct. 16). Judging is at 1 p.m. It is at the organizers discretion to turn away late comers.

5. No other fruits may be added (juices OK). 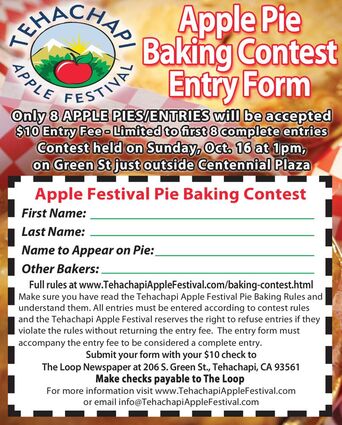 6. Pies that need special handling, refrigeration or heating elements are not allowed.

8. We recommend that pies are baked in disposable pans only, as pans will not be returned.

9. Pies will be scored on overall appearance and crust, filling and flavor/taste.