I had such a great time on a Sunday drive a few weeks ago that I decided to take another similar one last week. This time I took a different route to the Lake Isabella area – up and back down the canyon – specifically with the idea of visiting the Silver City Ghost Town in Bodfish. And once again, the drive was just as entertaining as the destination.

I headed out of Tehachapi on the 58 and took the Comanche exit, turning north toward the 178. A few miles later I turned right onto the 178, following the sign to Lake Isabella. This route took me right up the Kern River Canyon, a most beautiful drive, if a little scary with the narrow road and all the tight turns.

Driving the canyon route is not necessarily for the faint of heart, but it is worth a go. Going up, toward Isabella, you're on the inside, but you're also driving right by many sheer rock faces. Fortunately, there are many turnouts on the inside and a few on the riverside that are easy to get in and out of.

My Grandma used to say, "God must have loved rocks, He made so many of them," and if you like rocks too, you'll love the drive through the canyon. The riverbed is filled with large boulders – creating whirlpools and waterfalls and making the river more dangerous than it appears – and the surrounding canyon walls are littered liberally with rocks of all shapes and sizes, including the above mentioned rockfaces and sheer sides. The scenery is just spectacular.

Eventually the road evens out a bit and becomes a four-lane highway, offering more rolling hills and gullies. The road follows the river but it isn't always easy to see the river in this stretch.

I took the first Lake Isabella exit, and turned right on Lake Isabella Boulevard to go the short distance to Silver City Ghost Town in Bodfish, which is on the right.

Gold was discovered in the Kernville area in 1855, which started another California gold rush (the first being the Sutter's Mill discovery in Coloma in 1848); people came from all over the world to that little area of Kern County with hopes of striking it rich. The gold soon ran out, however, and the resulting boom towns and mining camps were abandoned.

In the 1970s the Dave Mills family saved the deteriorating miner's buildings and moved them to the spot that is now called Silver City (I don't know why it wasn't called Gold City...). The Mills's composite ghost town shut down a few years later and sat vacant until the J. Paul Curlew family bought it and began restoration in 1988. Silver City reopened again in 1992 in much the same state that we find it today.

In front by the parking lot, and free to visit, are a number of antique and collectibles stores. A short walk down the boardwalk and I was met by a young man named Shawn, who collects the entry fee and gives each visitor a welcoming speech and is available for questions. He told me the Silver City Ghost Town has been in continuous operation now for 30 years.

He also mentioned that there are over 20 buildings on the site, all taken from various mining camps like Keyesville, Whiskey Flat, Claraville, and Miracle. After the short welcome, I was on my own to explore the buildings that populate the Silver City town. What an interesting way to spend an afternoon! 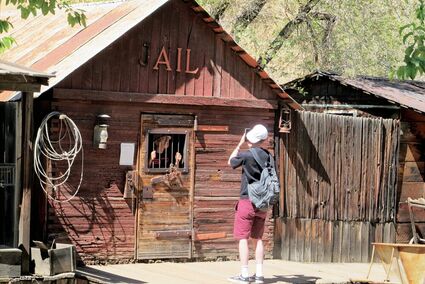 The original Isabella jail is a popular spot for photos in Silver City Ghost Town.

If you go, the ghost town is open daily from 10 a.m. to 4 p.m. (closed on Tuesdays) or anytime by appointment (760-379-5146). The entry fee is $7.50. The stores are free to explore and items including relics, antiques, collectibles and local artisan wares are for sale. Walking is over boardwalks and rough dirt pack.

After leaving Silver City, I spent a few minutes at the Lake Isabella Park (between Silver City and the entrance to the 178, all on Lake Isabella Boulevard) and checked out the military displays, and then headed back down the 178 through the canyon again and on to Comanche and the 58 home. Driving down the canyon I could see more of the river and the boulders in it, scenes I never get tired of.

© 2022 Mel White/Mel Makaw. Mel is a local writer and photographer, an avid day-tripper; she welcomes your comments, questions and suggestions at morningland@msn.com.