Thunder on the Mountain Car Show and music in Central Park 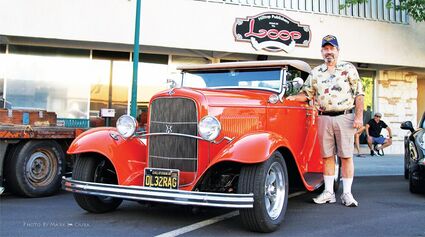 Race Communication's Thunder on the Mountain Car show was a big hit with over 200 cars and trucks showing up on Aug. 21. I saw many custom hot rods, trucks and muscle cars.

The show was a big fundraiser for the greater Tehachapi Chamber of Commerce. The proceeds from the event will go to benefit the organization and local businesses in the region and admission was free.

I would like to center on two of the fantastic cars that were on display.

First is Rod Hamilton's 1964 Jaguar E-Type. This car is so well-kept, so beautiful with its sexy, flowing lines. It's said that Enzo Ferrari commented that the E-Type is so pretty it well could be a Ferrari.

The full comment was the E-Type Jaguar is the "world's most beautiful car." When the head of Ferrari who made some of history's most gorgeous cars says something like that, it means tons in the car manufacturing industry.

The next car that stands out for me was a 1932 Ford Ragtop owned by local car buff John. John's 1932 ford is one of 275,000 built by Ford that year. About 185,000 were V8s and the "flathead" V8 was very successful. I am a big fan of Ford. Ford changed the world and made driving a car within reach of many people with the Model T and Model A.

The Ford Motor company brought mobility at an affordable price to many families, and to businesses that needed to move and deliver products. The quality of life improved because of Ford. Ford also created the assembly line the mass production process to keep the costs lower.

I really enjoyed all the "Hot Rods" and all that there is to do at the Tehachapi Mountain Festival. I got to check out two fantastic bands. The New Vinyl was playing in Central Park, it's a rock band with a great horn section. New Vinyl played all kinds of music with cover songs and is a Southern California based band.

The other great band was The Overdrive Band. They are an Antelope Valley/ Tehachapi based band. They played a wide ranging music and cover songs. I tend to focus on the rhythm sections with both of these bands and both bass players were stand out musicians laying down a fantastic groove bass line.

The Thunder on the Mountain Car Show and the Mountain Festival is always one of the year's high light events for me. I can't wait for next year's!