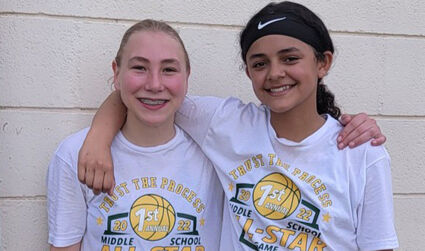 Koree Roden and Jaelyn Dock pictured after they won the tournament.

This last season, Tehachapi had two basketball champions. Koree Rodden and Jaelyn Dock are 8th graders who competed in the Kern County All Stars Tournament and won. Each school can choose two students to compete in this tournament and Koree and Jaelyn were both chosen by JMS. Although they did not win that game, they were invited back by the tournament hosts to play again, and they won!

But this success has not come without a lot of hard work. Both girls first got into basketball a few years ago because of their dads. And while at first they were not thrilled with this idea, after a year or two of playing, they grew to love it.

They both mentioned how playing basketball has given them the opportunity to really branch out to meet knew people who have become some of their closest friends. They also take a lot of inspiration from now deceased Kobe Bryant and his daughter Gigi Bryant. Both of whom got Jaelynn and Koree really excited to play basketball. They really look up to them and their legacy.

Both Koree and Jaelynn play for many different leagues. Including two here in Tehachapi, the JMS Basketball Team and a local league called Cal Breeze. In both, they are coached by Justin Dock. They also go to Bakersfield for coaching, some of which include Team Militant 14 and 16 and A3 Sport and Performance where they train at level 10. Koree and Jaelynn are very proud of their successes, but couldn't have gotten to where they are without support. Koree would like to thank her dad for all his moral support and her club coaches Percilla and Dia, as well as her Bakersfield coach Robby Bostain. And Jaelynn would like to thank both of her parents and her dad, Justin Dock for being her coach. They have big dreams, and both girls would like to get into college on a basketball scholarship to pursue a career in basketball.

And as they have graduated from middle school this year, they are planning on joining the THS basketball team. They are excited to keep competing within their loved sport.