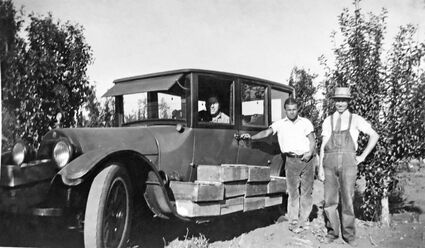 Some of my family members in their Cherry Lane orchard in August of 1928. They couldn't always afford a truck, so they would use their old cars on the farm.

High quality, great tasting fruit grows on trees today in the Tehachapi area, and has since some of the first homesteaders put trees in their own gardens beginning in the 1860s. The earliest commercial orchards were planted a decade or two later.

A man named Moses Hale planted an apple orchard here in 1880, and another named Joseph Kiser planted an apple orchard in upper Brite Valley in the 1870s, and sold some of the apples they produced to Southern Pacific Railroad, which apparently supplied them to the Harvey House restaurants that were once found at the location of larger depots. A few of those earliest apples trees still survive untended, the fruit they occasionally produce eaten by deer, squirrels and other wildlife.

Cherries were added in the 1890s, with the earliest known orchard was created by J. B. Phillips in 1890 when he planted 600 cherry trees on land in the area now known as Golden Hills. Crops that contain a single large seed in their center, such as peaches, apricots, cherries, plums and others are known as stone fruits, and a growing variety of them were added before the turn of the 20th Century.

An enterprising man named Burt Denison had the greatest impact when he planted 40 acres to Bartlett pears in 1910. Pear trees grow slowly, but they potentially can live a long time, like other pipfruits. Fruit with multiple small seeds, or pips (an old English term for a small seed), are collectively known as pipfruits to distinguish them from stone fruits, and include pears, apples, quinces and oranges.

Denison's pears slowly got bigger and more productive, and during those early years, he interplanted between the rows with other crops, including blueberries, currants and others. I was good friends with a Tehachapi oldtimer named Edwin "Brick" Jones, and Brick told me that as a teenager, he used to work for Denison, picking the assorted caneberries which would often be sold to passengers travelling through the area by train.

By 1922, there were an estimated 5,000 acres of fruit orchards in the Tehachapi area, primarily apples, pears and cherries. The little road that I live along, Cherry Lane, got its name because it was literally a single lane with cherry orchards on both sides. When my family first bought their small farm in 1921, there were still cherries growing along both sides of the narrow unpaved dirt road, visible in one of the photos that accompanies this story.

Those early days of the 1920s were the highpoint of orchard activity in the Tehachapi area, and fruit tree cultivation declined after that. Too many of the properties were in the hands of absentee owners, who weren't able to manage them properly. It also turned out that some of the lands that had been planted didn't have an adequate water supply to meet the irrigation needs of full-sized trees. The Great Depression of the 1930s, of course, also devastated the fruit industry, as it did most parts of the American economy.

And then, as now, there was always the biggest annual threat to orchard production in the mountains: one cold night in April.

Fruit blossoms, as temporary structures, have no internal antifreeze or other defense from icy temperatures, and are vulnerable to frost. A killing frost occurs when the temperature drops to 28 degrees Fahrenheit or lower, for two hours or more. At that temperature, liquid water inside delicate plant flesh freezes and expands, rupturing cell walls.

This destroys the plant tissue and ruins fruit tree blossoms. It happened this year, in fact: many local trees had a fantastic bloom and were covered in flowers, and then unfortunately the temperature sank on one cold April night and wiped out much of the area's fruit for this year.

In 1925, a pear grower named F. H. Rawley purchased 8,000 smudge pots to provide frost protection for his 90-acre orchard. These steel devices, which look like four feet of stove pipe attached to a fully-enclosed wash tub, were filled with #2 diesel and lit on the coldest nights, once temperatures dropped into the danger zone of 30 degrees.

Both the heat and the dark smoke that the smudge pots generated helped protect the blossoms from frost, but it came at a cost, of course: the initial price of the smudge pots, plus the fuel for them, the labor to place them out in the orchard, and then men or boys light them in the middle of cold nights. Other growers followed Rawley's lead and began smudging to protect blossoms.

Smudging still continued when I was a teenager, mostly just in Burt Denison's old orchard, which was still producing pears. At that time it was owned by John Nunes and managed by John Pulford, after many years of being owned by the Bisbee family. If you were on a smudging crew, you spent the night in the old bunkhouse and got $5 for staying the night and being on call, and $10 if you actually got called out and had to light smudge pots. But then oil embargos and rising costs in the 1970s put a permanent end to smudging. 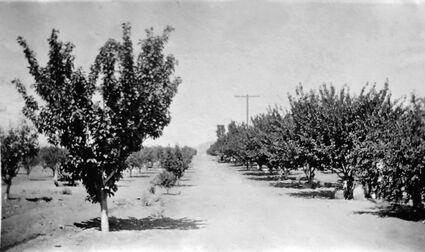 Cherry Lane as it once appeared: a narrow dirt road between expansive orchards.

There are still orchards in the Tehachapi area, and they produce delicious, slow-ripening fruit in favorable years. They are the descendents of those pioneer orchards from more than 100 years ago. . .