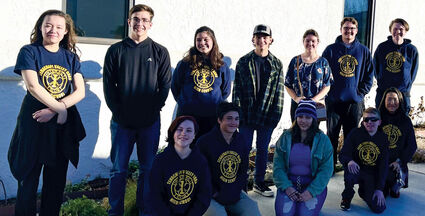 Schools have typically been a place for kids and teens to explore their interests and learn new skills. Outside of the classroom, clubs provide more opportunities for students to learn and grow.

Jack Wiehn and Nick Aldava were each interviewed about their club after holding an open-mic event at the Valley Oaks Campus. The open-mic event was organized by the two and showcased the talents of elementary, middle and high school students. The Interact Club often holds events such as these, as they held another open-mic last fall and have hosted school dances. But Jack and Nick want to specify that, although it can be fun to organize and host fun school events, the joys of participating in the club lie in their community service.

The Interact Club has participated in a multitude of events focused on the community. This includes: helping the Tehachapi Rotary wrap Christmas gift bags for their food drive, repainting the Gazebo at Central Park in collaboration with Parks and Rec and the THS Interact Club and helping the Rotary raise funds for Ukraine.

Jack and Nick expressed how much the club has allowed them to really participate in events that help the community and community members. They are planning a park cleanup in May and are holding a Hands Only CPR training event for all high school students who wish to attend on Monday, April 25. In this way, the Interact Club is special in that it allows students to help the community in ways they're not able to on an individual level.

"It's hard to do a park clean up if you're one person. But if you have a club full of people, you can have these ideas and go, hey, I can't do this alone, but with other people, I can push it forward and make it happen," Nick said.

But the club hasn't only helped them have access to opportunities to help the community. Jack and Nick also emphasized how social the club is and how much they've been able to interact and befriend students when they otherwise would not have the opportunity to do so.

"Making new friends is a big thing because before Interact, I had one or three people I could really call a friend. And now I would say these are people I enjoy being around, which is kind of new, especially coming out of COVID like, man, this is what people are like," Nick said.

Jack has been able to meet students outside of his grade that he knew he would have not interacted with otherwise as an upperclassman.

Along with socializing, the Interact Club helps its students build and grow life skills which Jack and Nick pointed out will be helpful in their professional future.

"I've learned just how to be open to new ideas. Sometimes you have your own agenda but [you] can't really push your own agenda all of the time so just taking new ideas, getting everybody's opinions," Jack said.

Both Jack and Nick emphasized how much they and their fellow members have learned about what it takes to be a leader. And they have found that the ability to lead is one of the most important skills they've gained.

Jack, who's graduating this year, explained how he's hoping the Valley Oaks Interact Club will advance in the future. 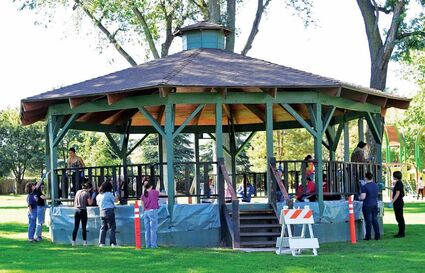 The Interact Club repainting the Gazebo at Central Park.

"I would just like to see them do more activities and events that cater toward the community...something we can do in the community just to help push us along as an Interact Club, not just as a social school club," he said.

He was able to help the club grow from having only five members during 2020, to now over 20. Nick, who will be continuing to lead the club next year, is planning on bringing in more community projects and is hoping to work more with the organizations and individuals of Tehachapi. As of now, they are planning a car wash fundraiser at their Brian Way Campus on April 23, and hope you come and support them. They are working to inspire more students to join their club and to set a foundation for the club that can help it flourish in the years to come.