The Little Brown Church in the Dale 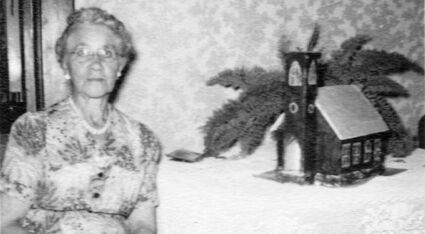 I have mentioned before that I originated in Mojave and only moved to Tehachapi in 1937. During my brief stay in the desert mining, railroad town one would have found two churches; a Protestant and Catholic. People attended the Catholic or the Protestant, or maybe neither. It was a friendly little town, just as Tehachapi is as well.

We did not attend the Protestant Church but one Sunday my sister attended a service there with a friend. I recall the minister's name was Reverend Oldfield; a kind, gregarious man. My sister came home singing a sweetest little song about a little brown church.

She could only recall the first verse and chorus so that is what I learned. It was such a charming and devotional song. I loved its tune and never forgot the melody and the few words I'd learned.

Skipping down a few decades, to 1952 in Camp Pendleton, my husband and I received a Christmas card from his grandmother, Susie Gracey. The card was signed with both, "Susie and Frank Gracey." The message on the back of the card said she was glad my husband, her grandson, was home in time for Christmas from Korea. She also explained the picture on the front of the card: a photo of Susie sitting by a cake she'd baked for their Methodist Church Bazaar. Lo and behold, it was a beautiful reproduction of The Little Brown Church in the Dale. Once again I was exposed to the existence of that church in the dale or vale as the lyrics use both nouns. My husband's sister told us that Susie had also entered it in the county fair but she never mentioned that. That would have been nice. It would have been a winner.

Grandma Susie was an industrious person. She was an Iowa farm wife. Born in Truro, Iowa and married to James Franklin Gracey.( One of my sons is named after him.) In addition to taking care of multitudinous farm chores she found time to make quilts, crocheting, knitting and oil painting. The baking went along with cooking for her family. I forgot to mention she played the organ and sang in the choir; no doubt singing the little brown church hymn occasionally.

Since we lived some 1,800 miles from my husband's birthplace, I only met Susie and Frank four times. I had dinner with them and tasted her homemade bread. I immediately asked her for her recipe and she said she'd write it out and send it to me; which she did. I still smile when I remember opening her letter written in her timeline, earlier day script. She had included a packing of dry yeast just in case this "California girl" had never heard of yeast. I still use the recipe and I do know, for sure, that it won first place in the county fair. Actually, her bread recipe is to be included in the Heritage League Newsletter this month.

My life did not include walking around humming the little church hymn, but I kept running into it. One day at our church rummage sale I picked up a little hymnal. It was published in 1913. I looked to see if the little song was in it and it was.

It is really called "The Church in the Wildwood," written by Dr. Wlliam S. Pitts in 1857. He sold the rights to the song for $25 to pay his entrance fee to medical school. I did not realize what a famous song it still is. There is a "little brown church" in Bradford, Iowa and people visit it, continually. There are pages in my research about it. Pitts was born in 1830 and died in 1918 a well-known doctor.

Dr. Pitts piece was rearranged both with words and music and copyrighted in 1910 by E. E. Excell. The little song I hummed and sang all my life was famous and I did not even know it.

That's okay. There used to be another song called, "The Song Is Ended But The Melody Lingers On." The Little Brown Church In The Vale still is being sung daily somewhere and I now have all the words in my 1913 hymnal.