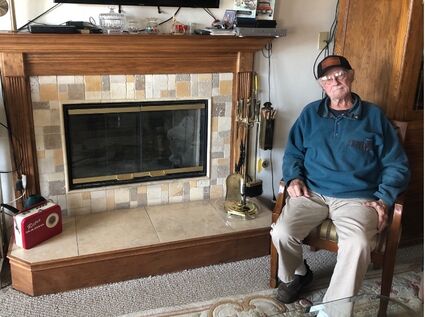 James Gillen sits next to the fireplace he built in the home he has loved for 23 years. The mortgage company foreclosed on his house due to an unpaid property tax bill and he will soon be evicted.

James "Jim" Gillen has been a fixture around Tehachapi for 23 years.

He grew up in Colorado Springs, then joined the Air Force for six years. While in the service, he fell in love with the beauty of California and moved to the South Bay. He met his first wife when they worked together at Fedco. After they were married, they had two children and Jim attended Long Beach State University, majoring in manufacturing and engineering aerospace. Later he got a job with Garrett Air Research (which later became Allie and is now Honeywell) where he worked for over 30 years.

Some of Jim's biggest achievements were being part of the first 13 moon shots where he developed the electric motor that drove the wheels on lunar rovers. He was also responsible for developing the cooling system for the space station. Later he was in charge of manufacturing military and civil air craft parts with over 200 employees in their offshore facility.

Jim and his second wife, Barbara, moved up to Tehachapi after retirement. They stayed active by giving weekend tours and fireside chats at Red Rock Canyon State Park. When Barbara passed away a few years ago, Jim lost his zest for living and became negligent in some of the bills. As many older citizens do, Jim had his bills put on autopay. However, the property taxes and water bills were not among them.

Jim had ample funds to cover the bills, yet the mortgage company didn't make any personal contact nor did they check his bank to verify funds. When the mortgage company was contacted for a response, it was always a different customer service person with a different response. All they have is copies of mailings but no confirmation of receipt. Instead of attempting to allow Jim to pay his bill by having funds withdrawn, they opted to pay the property taxes themselves and foreclosed on Jim's home.

Questions arise: Where is an advocate for seniors when they're in this situation? Why is the mortgage company only required to mail something instead of being required to make contact? Why couldn't they have the payments deducted from his accounts instead of resorting to the drastic act of foreclosure? Why wouldn't there be notifications made to family members in the event that the individual is incapacitated?

A reverse mortgage lender was asked about this situation and she forwarded a link to the http://www.aag.com website indicating the history of reverse mortgages. The rules governing tax and insurance payments to be set aside weren't established until 2015 (six years after Jim signed his reverse mortgage loan). These new steps were expected to protect consumers and alleviate borrowers who might fall into default from noncompliance.

Jim first found out about the delinquency from a real estate agent in Tehachapi, Roxane McCosh, who discovered it in a property search. She knocked on his door and they discussed the situation. She put him in touch with a foreclosure specialist who called the mortgage company. The representative said if they received the amount owed plus fees, "all proceedings would be halted." A GoFundMe page was established, funds were raised and ready to be disbursed, but ultimately, with a different customer service contact each time, the mortgage company would not accept the payment or reverse the sale.

Roxane reached out to the buyer of Jim's home, a property investment company, and told them Jim would be interested in staying in the home and renting at the market rate. The company owner said they are not in that kind of business; they are in the house-flipping business. They paid $230,000 at auction and have now filed an eviction lawsuit against Jim. The owner indicated they may consider selling it back to Jim if he agrees to pay a yet unidentified amount above the $230,000. That isn't an option for him right now.

At 84, Jim is unsure where he will go or what to do. He hopes the sale could be legally reversed or that someone would buy it from the property investment company and give him a life lease at the market rate. Otherwise, he may need to move in with a friend.

If you would like to help Jim, please reach out to our district representatives on his behalf: Senator Shannon Grove (shannongrove.net/contact), Congressman Kevin McCarthy (kevinmccarthy.house.gov/contact) and Assemblyman Vince Fong (ad34.asmrc.org – scroll down and click on "contact me"). Be sure to mention James Gillen by name and if applicable, choose "senior citizens" from the list of issues.