After a couple of days of strong winds, rain and blowing snow, Thursday, Feb. 24 was clear, calm and cold. The perfect flight test weather greeted everyone on the ground and at altitude for the important full retraction of all landing gear on Stratolaunch carrier aircraft, the largest aircraft by wingspan in the world – 385-feet. Nicknamed "Roc" as a tribute to the giant bird of Arabian and Persian mythology.

Aviation photographers and devoted fans watched from the end of runway 30 at Mojave Air & Space Port to witness the grandeur of the liftoff and landing. Takeoff time was scheduled for 8 a.m. PST, but last minute pre-flight lists took longer than expected. At 12:23 p.m. "Roc" lifted into the air for the fourth time since her maiden flight in April 2019.

The aircraft flew for 1 hour, 43 minutes over the Mojave Desert and reached an altitude of 15,000 feet.

Roc has a very complex landing gear system with two nose gear and six landing gear on the main fuselage, 24 brakes, 28 wheels and 34 moving panels or gear doors. This was the first attempt to retract all 28 wheels (8 bogies).  The last flight retracted the middle left bogie only as a test.  The reason for the left side was so the crew could observe the retraction.

Roc will be used as the carrier aircraft for Stratolaunch's upcoming hypersonic test-bed named Talon-A.

The Talon-A can be fitted out with different payloads and is fully reusable, designed to enable swift, repeatable testing of hypersonic flight technologies for all manner of applications. 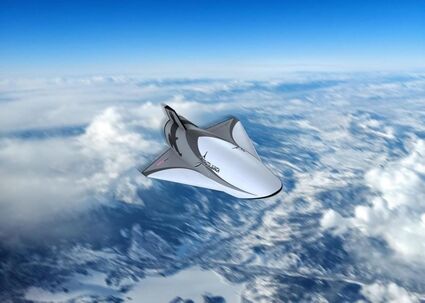 In addition to testing the carrier aircraft, the team continues to make progress on system integration of two Talon-A test vehicles, TA-0 and TA-1. The team has also started fabrication of a third vehicle, TA-2, the first fully reusable hypersonic test vehicle. The company anticipates beginning hypersonic flight testing in 2022 and delivering services to government and commercial customers in 2023.

At 2:07 p.m. Roc made a perfect touchdown on runway 30 at Mojave Air & Space Port, concluding a spectacular and productive test flight.

The massive twin-fuselage, six-engine aircraft was designed by Burt Rutan and Scaled Composites. The project was funded by Paul G. Allen with the intent of being a mother-ship that would launch rockets and satellites into low Earth orbit. The mission changed after the unfortunate death of Allen. When new owners acquired Stratolaunch in 2018, the decision was made to use "Roc" as a launch platform for hypersonic test vehicles that would reach speeds of Mach 6.