So, when does it snow in the Tehachapi Mountains?

A snowstorm on March 18, 2012 put these snowy highlights on Kohnen's Country Bakery.

It's been reassuring this winter for longtime Tehachapi residents to see snow still lingering on the mountaintops and higher elevations from snowstorms in December and January. Snow remaining for weeks in the Tehachapi Mountains used to be a more frequent occurrence when our winters were colder.

In fact, I can remember some years when there was still snow visible in May, in the mountains south of Highline Road near Tehachapi Peak and on Summit Lime Company land. Of course by that time there was green grass and wildflowers in bloom in the valleys, but the snow would still stick around in shady places at the highest elevations.

One of the earliest written descriptions of the Tehachapi Mountains came from explorer John C. Fremont. He and his party came through on April 14, 1844. After camping near what is now the hamlet of Caliente, Fremont and his men continued on.

He described the journey up along Tehachapi Creek: "It was enriched by a profusion of flowers, and handsomely wooded with sycamore, oaks, cottonwood, and willow, with other trees and some shrubby plants. . . The air was filled with perfume, as if we were entering a highly-cultivated garden; and, instead of green, our pathway and the mountain sides were covered with fields of yellow flowers, which here was the prevailing color. All the day snow was in sight on the butte of the mountain (this would have been the upper slopes of Bear Mountain), which frowned down upon us from the right; but we beheld it now with a feeling of pleasant security, as we rode along between green trees and flowers. . ."

I have researched among the weather records kept by the National Weather Service to see what the historical records tell of snowfall in the Tehachapi area. The records only go back a little over 100 years, but they do provide good evidence of local snow patterns in the past century.

On a couple of rare occasions, the snow season in Tehachapi has begun as early as October. National Weather Service records for Tehachapi indicate just two instances of October snowfall, each of them exactly half an inch (.50 in.) in 2004 and back in 1949. Moisture in October almost always falls in the form of rain, and any significant precipitation in October starts germinating seeds and greening local plants, signaling a welcome end to the annual dry season.

November is the first month when snow, though uncommon, is a realistic possibility. In 1985 we recorded 13 inches of snow in November, and there was 10 inches in 1967. Usually November snows only produce a few inches.

December, the Christmas month, is a more reliable time for snowfall – in 2019, for example, we had 16 to 18 inches of snow the day after Christmas, and the fast falling, wet and heavy snow broke thousands of tree branches throughout the area.

January holds the record for the single snowiest month in Tehachapi weather history: in the harsh winter of 1933, there was a total of 44 inches of snow in January, produced by a succession of snowstorms. January of 1930 also produced 32 inches of snow. Those were days of long road closures. The small population of those who lived outside town, scattered up in the mountains and outlying areas simply couldn't get out for days on end, unless it was on foot or horseback.

Though often quite cold, February hasn't typically been one of our snowiest months. The record for February snowfalls occurred back during that cold era of the early 1930s – in 1932, 21 inches of snow were tallied. More recently in 2001, February produced a total of 19.30 inches of snow, and in 2009 we had 15 inches.

Many would be surprised to learn that our average snowiest month, at least historically, has been March. While not the coldest month, March can often be the wettest month, and as long as the temperatures drop to around freezing, we can get snow instead of rain. 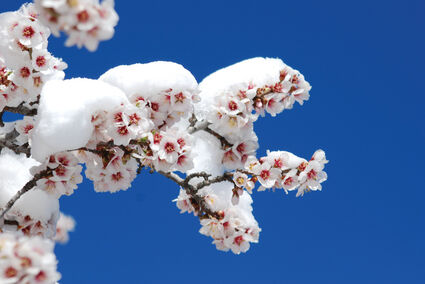 Tehachapi spring snows often fall on flowers that are already blooming, like these almond blossoms.

So there you have a little historical weather data on Tehachapi snowfall patterns. It's become harder to know what to expect, with our changing climate producing warmer, drier winters, but I know that whenever I look up and see snow still on the mountains, it makes me smile.