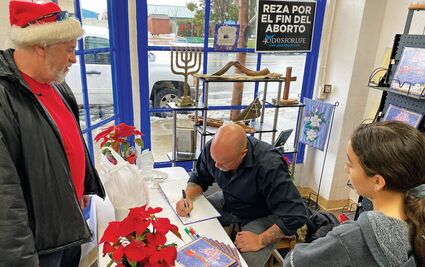 Rob Saranpa signs book for customer Tom Carmody, who is wearing a festive Santa hat, as a young girl observes.

"We love Tehachapi," said Adriana Garthwaite a few moments before the book signing was scheduled to take place. "We always want to support the community and further the Gospel."

Saranpa told about how The Night Jesus Met Santa Claus won third place in a Christmas song contest last year. The prize was a ukulele. He remembers answering a phone call from Tennessee. The man on the phone started the conversation by quoting Saranpa's song, "'I've checked my list, I've checked it twice, I don't see any Jesus Christ.' What a brilliant line!" The man turned out to be Joe Beck, a managing partner at Songwriting University in Nashville, Tenn. He wanted to personally congratulate Saranpa on the success of his song in the contest. He also welcomed more songs and collaboration with Saranpa.

"This book is my way of introducing kids to Jesus through Santa Claus," Saranpa said. He elaborated when asked about recent sales: He's shipped several books that were ordered through his Spotify store recently, which is great, but what he was really excited about is the fact that The Night Jesus Met Santa Claus has, to his surprise, found a modest following. For example, there's a group in Korea that really seems to appreciate the story. He also discovered that a woman has posted a puppet show on YouTube based on the book, and the youth group of a predominantly Chinese church in Washington adapted his book into a play, which they acted out and posted on YouTube, as well. "It's really cool to see this taking on a life of its own," he said.

The Night Jesus Met Santa Claus is available at the Tehachapi Christian Store, located at 108 E. Tehachapi Blvd., and on the author's Shopify page: nohawkmusic.myshopify.com/products/the-night-jesus-met-santa-claus. You can find the song on YouTube by searching "Ricky Traywick Jesus Santa."