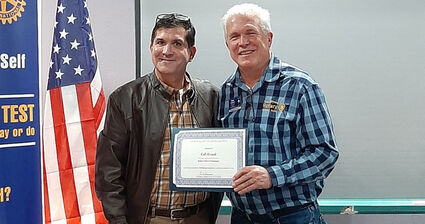 Cal Rossi of Southern California Edison spoke to the Rotary Club of Tehachapi about their progress in updating our area.

Cal Rossi from Southern California Edison (SCE) spoke to Tehachapi Rotarians at their December 9 meeting. Rossi has been the SCE government relations manager responsible for our area since 2009 when he began his relationship-building efforts with local leaders, a position which became more important recently with the policy of Public Safety Power Shutoffs (PSPS). His territory covers an area from Bakersfield to Mammoth and includes Kern, Inyo and Tuolumne counties.

Rossi began by thanking the local population for their patience and support during the period of upgrading their systems. He told Rotarians that SCE service covers about 50,000 square miles and that about 14,000 of those are in high fire risk areas. They service about 5 million customers with about 2.9 million in high risk areas. The SCE area uses about 1.4 million poles with about 300,000 of those in high risk areas. The SCE wildfire mitigation plan includes the replacement or wrapping of these poles and replacing the old wires with insulated wire.

Rossi said that over the last several years SCE has set up a network of weather stations to help in narrowing the areas where PSPS is necessary. As a result, there has not been a shut off in the City of Tehachapi in two years and there have been less PSPS events locally as the system upgrades have been completed.

In 2018 a Senate Bill (SB100) was passed, said Rossi, establishing a policy which requires wildfire mitigation and a goal of carbon neutrality by 2045. New homes must now have solar and incentives are being offered for the purchase of electric vehicles.

He emphasized that while Kern County is a high oil production center, it also is the number one California county in the production of renewable energy including wind, hydroelectric and solar power generation. It also is the home of the first battery storage facility.

Back on July 14, Cal Rossi and Terry Ohanian, SCE's Director of Grid Hardening, participated in one of the City of Tehachapi's famous podcasts. In the hour-long episode, Rossi and Ohanian fielded questions from local residents and from the TehachaPod hosts City Manager Greg Garrett, Economic Development Coordinator Corey Costelloe and Community Engagement Specialist Key Budge. The episode received a silver award from the Academy Of Interactive and Visual Arts.

The Rotary Club of Tehachapi is a volunteer service organization with the motto, "Service Above Self." The Club meets on Thursdays from noon to 1 p.m. For more information about Rotary Club, you can visit their Facebook page at www.facebook.com/RotaryClubofTehachapi/ or contact club President Paul Kaminski, (661) 699-5851.