Our Cleaner Planet: cleaning up the mess 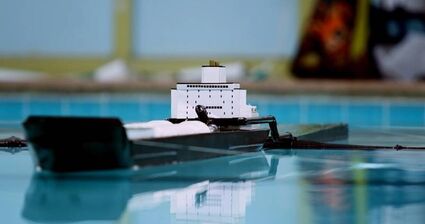 Being a mountain community, we don't often think of Tehachapi in connection with the environmental issues plaguing our planet's oceans. But I recently had the honor of speaking to Pat Marshall, Tehachapi resident and founder of Our Cleaner Planet (OCP). OCP is a nonprofit startup that has developed an innovative way to remove plastics from the ocean.

Marshall started out in aviation, working with his father at a small airport in Lompoc, California. In 2010, he moved to Tehachapi and went to work at Edwards AFB. Some time in 2012, he read about plastics in the ocean. The problem had been identified years before that but was largely ignored. A self-described "geeky, engineer kind of guy," Marshall began researching the issue. "There wasn't much data back then," he said. "But there's been an explosion of data in the last few years, [in terms of the] cause-and-effect of having so much plastic in the ocean." Before that, individuals, countries and corporations dismissed the growing issue in international waters as "not their problem." Marshall remembers thinking, "There's got to be an effect. We can't just throw stuff in [the ocean] willy-nilly."

We're all familiar with the heartbreaking problem of sea turtles mistaking plastic bags for jellyfish, seals tangled hopelessly in plastic netting, and birds starving to death, stuffed full of tiny bits of plastic that are impossible to digest. Many of us have educated ourselves by watching documentaries such as A Plastic Ocean and Trashed. Most of us agree that plastics in our oceans are a huge problem.

But according to Marshall, they're far more destructive than most people realize. Plastics do not biodegrade. Instead the polymer strands break down into smaller and smaller pieces, allowing them to be digested by ever smaller animals, right down to plankton, the foundation of a healthy marine food chain. Marshall explained that these microplastics are known to adhere to coral and plankton. Tiny plastic materials lacerate the soft bodies of the animals inside the hard coral skeletons, causing infection and widespread disease.

Marshall stated that we've already lost 40% of the oceans' phytoplankton, which produce our oxygen. Phytoplankton also absorb more CO2 than any of the forests in the world. In other words, we're losing the largest carbon sink in existence. "If we can find a way to restore ocean health, [phytoplankton] would remove more carbons than we ever could with mechanical devices," said Marshall.

The process OCP has created is able - in a swath half a kilometer wide and sixty feet deep - to remove nanoplastics measuring as small as five microns from the ocean. To put that in perspective, the average human hair is 50 to 90 microns thick. Additionally, they will actually be able to convert the harvested plastic into fuel, allowing them to stay on station longer. The harvester vessels will be equipped with onboard CO2 scrubbers, precluding the emission of carbon dioxide into the atmosphere, instead breaking it down and using it as fuel for the harvester. The only byproduct, a 10% ash, will be used in other products. In other words, this process will operate without creating any waste to be dumped in a landfill.

Once he learned about the problem, Marshall began drafting design concepts to remove trash from the sea. As his idea took shape, he realized that he would need to form a company to drive the mission to clean up the planet's waters. He formed Our Cleaner Planet, which was incorporated in 2018. The original board of directors (comprised of an attorney, a CPA, an international business expert, an engineer and Marshall) is still working together toward their mission of removing plastics from the ocean. They've worked pro bono these last five years. Marshall said, "I've been self-funding the whole thing," but added that they are looking for ways to fund the project with the help of corporations.

Although the board has wanted to go public from an early stage, Marshall convinced them that it would be better to wait until the technology was proven before asking people to invest in the idea. He built a 1:64 scale prototype (about 6.5 feet long), which he tested right here in Tehachapi. He even used the Bear Valley swimming pool for some of the tests. The test results exceeded all expectations.

When people ask Marshall about the competition, others seeking to solve the same problem, he has a progressive and positive way of looking at it. Of course, he believes that OCP is better than the rest, but he added, "If everybody is working on [this problem], then we can solve it faster. So there's not really competition. It'll be more like rivalry. We're all on the same team. I mean, if you beat me, I'll feel bad, but I won't discourage you from beating me." Because the problem is so much bigger than any of us.

Marshall wanted to be sure to let the community of Tehachapi know how grateful he is for all the support and encouragement his project has received. Bear Valley was supportive by allowing him to use the pool for testing. "Normally a pool would say, 'Absolutely not,' but they didn't do that," he said, adding, "The city has been nothing but helpful."

"We live in a great community," said Marshall. "We'd love to continue on here, but we're going to have to live near a port [for the next phase of development]. We're never going to sell the home that we have in Tehachapi. We'll always be part of this community that we love. And we'll never forget that. [Our Cleaner Planet] started right here in Tehachapi. [It] was conceptualized and designed here and the prototype was tested here."

For more information about this project, please visit http://www.marinelink.com/news/marine-concept-design-ocean-plastic-492098.