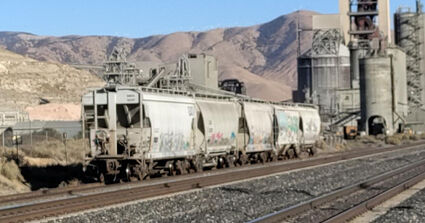 Hopper cars waiting to be loaded at the Cement Plant.

Hopper cars appeared in the 1830s, either covered or uncovered. They weren't highly used until the 1970s when jumbo hoppers were developed that could carry more than boxcars. Hoppers transport bulk material such as grain, cement, rock, etc., and have doors or a drop bottom for unloading. The number of bays a covered hopper has depends on the weight of the product. Heavier products, like cement, travel in covered hoppers with fewer bays. The floor of the hopper is slanted to help unloading. If the floor isn't slanted, it is a gondola.

Small covered hoppers similar to those used at the local cement plant have two bays and two gates and typically carry heavier products like cement, roofing granules and sand. Small covered hopper cars are 42 feet in length and can carry loads ranging from 207,000 to 233,000 pounds. They look just like traditional hopper cars, with fixed sides and ends. But instead of open tops they have roofs with airtight hatches that protect the contents inside from the elements and contaminants.

Covered hoppers carry free-flowing dry bulk commodities like cement, roofing granules, sand, corn, wheat, barley, fertilizer, soda ash, sugar and rice. These hoppers feature an open top into which product can be loaded and a sloped floor that allows product to be unloaded through doors at the bottom using gravity. The top is then covered to protect the contents inside.

The bottom of a covered hopper has chutes, also known as gates, that can be opened to unload the product. Each bay has its own chute, and these chutes are angled so product can flow through quickly and easily.

Unlike commodities like coal or gravel, which can travel safely in open-top hoppers, the products that ship in covered hoppers could be damaged or compromised if they're exposed to weather or other contaminants. For instance, if dry cement were mixed with rain water in transit, it would change the nature of the product and make it impossible to unload. If grain met with rain, it could rot. If sugar or rice encountered dust, it could make it unsafe for consumption.

Covered hoppers are loaded from above and unloaded from the bottom of the rail car. The roofs of covered hopper cars have airtight hatches that can be opened during loading, and then closed to protect the product during transit. There are three types of hatch covers, round, trough and hybrid. Round covers reduce exposure to the elements and dust contamination. Trough covers run the length of the car, allowing for greater flexibility when loading the product. Hybrid hatches combine the trough and round designs, so the car be used at either style of loading facility

Covered hoppers are self-clearing, meaning they rely on gravity for unloading. During unloading, sloped floors and doors that open at the bottom allow product to flow through. This method of unloading is also known as the sliding gate method.