Ceremonial sword presented to Portrait of a Warrior Gallery 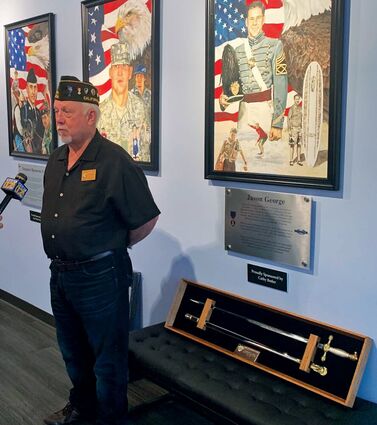 On Oct. 30, the Major Jason E. George VFW Post 12114 presented the Portrait of a Warrior Gallery Kern County with Jason's ceremonial West Point sword. In a solemn ceremony, the sword was presented to the Gallery by Post Commander Russell Slover, Jr. Vice Commander Kenneth Kendall, and Quartermaster Alex Athans. The sword will be on loan to the gallery for an indefinite period; Jason's mother, Candy Mason, had presented her son's sword to the VFW post this past May, over Memorial Day weekend. The VFW post on F Street in Tehachapi had recently celebrated its 10th anniversary.

Jason E. George grew up in Tehachapi, graduating from Tehachapi High School where as a senior he had kicked the winning field goal in the finals of the Desert Inyo League Championships. He graduated second in his class at West Point and in 1994 was commissioned as a 2nd Lieutenant in the Army. Although he left active duty in 2002, in early 2009 he was recalled to active duty and assigned to the 1-252nd Combined Arms Battalion in Iraq. As a friend recalled, Jason might have been able to use his Reserve duty at West Point to "pull strings" to avoid duty in Iraq. "A lot of guys would fight it or hire a lawyer to get out of it, but he didn't. He said, 'This is my duty and I'm gonna go.' He had no hesitation, which is a real tribute to how he felt about his country." (Our Soldiers' Stories, pg. 155, by Craig Luther, publication pending.)

Less than three weeks after arriving in Baghdad, Iraq, Major George, 38, was killed by a terrorist's improvised explosive device on May 21, 2009. Also killed in the blast were two national guardsmen, 1st Lt. Leevi K. Barnard, 28, of Mount Airy, North Carolina; and Sgt. Paul F. Brooks, 34, of Joplin, Missouri; other soldiers were seriously wounded, while a number of innocent Iraqi civilians were killed and injured.

Jason was the first of his West Point class to die in direct combat. He was also the first person to be buried at the Bakersfield National Cemetery. His awards include the Meritorious Service medal, Army Commendation medal, Army Achievement medal, two National Defense medals, Army Service medal, and Iraq Campaign medal with Bronze Service Star, as well as posthumous Bronze Star and Purple Heart medals.

Also on Oct. 30, Craig Luther gifted his maternal grandfather's framed Purple Heart to the Portrait of a Warrior Gallery. His grandfather, William "Bill" Hedegaard, had emigrated to the United States from Denmark at the beginning of the 20th century. In late 1918, he found himself back in Europe - this time as a brave message runner in the American Expeditionary Force (AEF) fighting the Germans during the Meuse-Argonne Offensive, which lasted from late September until the Armistice of November 11, 1918, ending World War I. This offensive, involving more than one million American soldiers, was the largest and costliest in U.S. military history, claiming the lives of more than 25,000 Americans. Bill Hedegaard (dearly beloved by his three grandchildren as "Daddy Bill") survived the battle despite being grazed in the head by a German sniper. He lived a very full life and passed away in 1971.