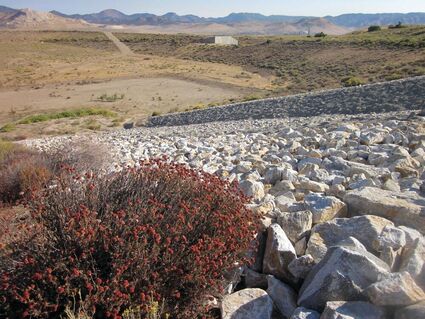 The case of the Tehachapi-Cummings County Water District vs. the City of Tehachapi is scheduled for a mandatory settlement conference on Nov. 3 at 10 a.m. The remote meeting, involving all parties, is not held in court.

"We want to get it resolved," water district Manager Tom Neisler told The Loop. "We laid out our case in 40 pages."

The "40 pages" is Superior Court of California County of Kern Case No. BCV 21-102184, a petition for writ of mandate that seeks to set aside the Environmental Impact Report (EIR) submitted to the City by the developers of the 1,000-residential unit Sage Ranch Development Project. Crawford & Bowen Planning, Inc. of Visalia produced the EIR.

The petition also asks the court to void the City's approval of the Sage Ranch Project and any contracts the City has signed with the developers.

All City water, with the exception of non-potable water for irrigation of school fields and landscaping that the water district imports from the State Water Project (SWP), is drawn from the Tehachapi Basin aquifer through wells.

One way the city plans to maintain its water stability is through its Groundwater Sustainability Project, on which the city and the water district are working together to produce additional potable water. The city approached the water district in April of 2019 with the proposal, which met with a favorable response from the district board of directors. The board approved a memorandum of understanding (MOU) with the city on May 20, 2020.

At the Oct. 6 meeting of the Greater Tehachapi Economic Development Council, Tehachapi Development Services Director Jay Schlosser explained that the groundwater sustainability plan would send effluent from the city's wastewater treatment plant south, up the hill to water district-owned Blackburn Dam, where it would percolate into the earth. After eight to ten years of filtering through layers of rock and sand, the water – clean and purified by nature – would recharge the Tehachapi aquifer and provide potable water in the city's wells. The project, he said, would maximize the use of the effluent and decrease the city's need for imported water from the state, producing almost 700 acre feet of water a year for the City.

"It is a continuous source of water – it never stops and will never be used by others," Schlosser said. "This is our water. It can't be taken."

Blackburn Dam is a flood control structure and is unlikely to fill up as the effluent is pumped in and sinks into the ground.

"We're not filling the dam," Tehachapi City Manager Greg Garrett said. "It percs as fast as we put it in. It's a perfect recharge site."

At this time, the city's wastewater plant treated effluent is spread on fodder crops at the airport or sent to the city "borrow pit" pond at the east end of the city.

"Disposing of the [waste] water in its current state doesn't have much value," Schlosser said.

The city's investment in the groundwater sustainability plan would be approximately $15 million, he said, and the project can be up and running in two to three years.

While the City and the water district are working together toward a common goal on the Blackburn Dam recharge project, they are fiercely at odds over the availability of water for future developments in the City of Tehachapi.

The City of Tehachapi and the Tehachapi-Cummings County Water District are at war, and it is not pretty.

"[T]he EIR's description of the Sage Ranch project and its environmental setting are incomplete, inaccurate and misleading," the water district's Petition says.

"The District's arguments are both misguided and unsubstantiated," fired back attorney Kristin A. Hagan of Hagan Denison, LLP, representing the city, in an Aug. 16 letter to the Tehachapi City Council.

Making a distinction between "paper water" and "wet water," the water district asserts that, "The EIR for the Sage Ranch project fails to meet CEQA's [California Environmental Quality Act] standards for water supply analysis and instead simply assumes that a solution to potential supply issues will be found."

It further asserts that as the city approved almost 1,000 new M&I [Municipal and Industrial – that is, residential and business] connections in a city of 3,000 existing M&I connections, the city failed to comply with CEQA requirements that it address cumulative effects of the Sage Ranch Project.

In an Aug. 16 Supplemental Staff Memorandum, the City says it is not relying on "paper water" and "has undertaken a full analysis that shows there will be sufficient water to meet the demand."

The water district Petition asserts that the City misunderstands water supply issues, "including over-estimating the amount of water available in the basin by 90,000 acre feet."

The water district says it does not have enough water to meet the City's anticipated demand.

"No surplus water exists in the system; this is not some speculative future event – the District's supply is already strained," the Petition says. "Simply put, the City is attempting to commit the District to provide water it does not have."

The Sage Ranch Project will require 350 acre feet of water a year for residences. Schlosser said that the City is committed to providing 175 acre feet and the developer has promised to provide the additional 175 acre feet in new water rights. The water district asserts that the Applicant has not revealed where that water will come from or when it will be available. The City contends that the water district "has been aware of the source of the water rights the Applicant intends to dedicate to this Project" and that the District has received a copy of a water purchase agreement between the developer and a third party. An email memo to the water district and the City from Sage Ranch developer Jeff Ciachurski includes a copy of "Water Rights Purchase Agreement and Escrow Instructions," dated Aug. 11, 2020, in a five-step process to purchase water for the Project.

The water district says there is no evidence in the record "that the water rights are the subject of an enforceable commitment to serve the Sage Ranch project through the conditions of approval."

Attorney Hagan suggests in her Aug. 16 letter to the Tehachapi City Council that the Project [Sage Ranch] is being "utilized as a political pawn," and, "In the absence of a cogent argument backed by verifiable facts, it is reasonable to conclude that the district is attempting to use our client's Project as a vehicle for pushing a larger agenda."

In an Aug. 16 memorandum to Schlosser, Joseph D. Hughes of Klein DeNatale Goldner, attorneys for the City, says that "TCCWD's [Tehachapi-Cummings County Water District] general manager and several of its board members are engaged in the agricultural industry."

The Hughes memorandum to the City further says: "When considering the SWP water needs of a [sic] M&I user, TCCWD's general manager and board members have a conflict of interest in that increasing M&I allocation will, in the presence of a shortage, necessarily reduce the agricultural allocation."

In case of Exceptional drought (the current condition), the water district says in its Petition that surface water deliveries to agriculture "are slashed." Water district Ordinance 2021-1 prioritizes residential and business deliveries (M&I) above agriculture (fire storage is top priority). In the event of water shortage, agriculture customers are served in a specific hierarchy after the M&I customers are served. The ag customers curtail their planting or change crops to use less water.

In analyzing Project alternatives, the environmental report concludes that a reduction of the Project by 50 percent is not feasible.

The project alternatives, spelled out in detail in the Draft EIR, include "no project," "alternate location" and "reduced (50 percent) project." The EIR analysis rejects the first two and admits that a smaller project would reduce noise, air pollution, water use, need for public services and traffic.

Nevertheless, the EIR rejects the smaller project alternative, as it does not meet requirements of the Tehachapi General Plan regarding diversity.

In rejecting a smaller project, the EIR states: "A lower density project would likely result in a single-family neighborhood, which does not provide a variety of housing types and would not be consistent with the City's General Plan which expressly requires projects of this size to contain a diversity of housing types."

The water district discounts this EIR conclusion as "boilerplate and advocacy of the project" presented "in a string of unsupported assertions and non sequiturs designed to deflect the inherent reasonableness of reducing the project's size to avoid or reduce its significant adverse environmental effects..."

The water district's Petition states that the EIR "omits at least one obvious potentially feasible alternative – a project of reduced size that maintains the same or similar relative percentages of diverse housing types as presented within the proposed project."

The City, in a Supplemental Staff Memorandum of Aug. 16 said the water district had not responded to the Project size issue in a timely manner during the public comment period, and the EIR is not tasked with assessing other alternatives.

"This sandbagging is improper under CEQA and the City is not obligated to respond to these comments," the City memorandum said.

In a Claim for Relief in the EIR, the District says that the City failed to provide a public scoping session to explain the project and solicit responses. The Draft EIR public review was from March 4, 2020 through April 17, 2020. The public review yielded four letters of response.

The CEQA water battle is similar to the environmental challenge that stopped the construction of the Tehachapi Adventist hospital for a year and added $11 million to the cost of the project. Judge Kenneth Twisselman oversaw the court proceedings and found for the Tehachapi Valley Healthcare District, the owner of the hospital.

Judge Twisselman is presiding over the current dispute as well.

The Sage Ranch EIR and Draft EIR are available on the City of Tehachapi website under government – development services – Planning Department – CEQA.

attorney for the City of Tehachapi in the Sage Ranch matter

We have acknowledged and continue to acknowledge that the District is not in the business of making land use determinations.  It is our responsibility, however, to ensure that the public is made aware of the impact of the City’s decisions on water resources that impact all customers.

Hughes’ comment does bring up a central point: The EIR did not analyze the fact that the Sage Ranch project, in conjunction with the multiple, other approved developments within the city, would increase water consumption to the point that agriculture water allotments could be reduced. Of course, it also impacts all of our other existing customers, both in the city and in Golden Hills, Bear Valley, Stallion Springs and all other areas. TCCWD’s purpose is to manage water, both in times of surplus and shortage. We have done so consistently and effectively for more than 50 years.