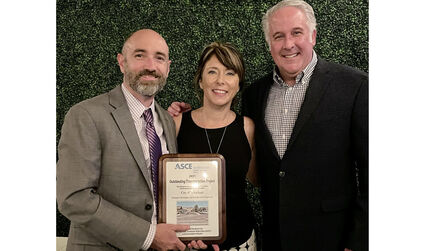 The City of Tehachapi was honored on Sept. 23 with the Outstanding Transportation Project engineering award from the American Society of Civil Engineers for the Tehachapi Rail Corridor Pedestrian Safety & Enhancement Project.

"A special thanks to the American Society of Civil Engineers for their recognition of the City of Tehachapi. The Railroad Safety project took many years to complete due to the complexity of working near the rail lines. While challenging, we think the results speak for themselves with a vastly more pedestrian and bicycle friendly environment that was achieved without sacrificing vehicular capacity. It is important to thank the Union Pacific who contributed a significant sum of their own funds to aid in the improvements. This is yet another step in improving Tehachapi's historic downtown and we look forward to many more," said Jay Schlosser Development Services director.

The Rail Corridor Pedestrian Safety & Enhancement Project included sidewalks and fencing along H Street on the north side of the train tracks between Mill Street and Hayes Street. Sidewalks and crossings on the east and west sides of Green Street, Hayes Street and Dennison Road. The Tehachapi Rail Corridor Pedestrian Safety & Enhancement Project had a total project cost of $2.1 million dollars, and the construction was completed in approximately 12 months. The project was funded by the Active Transportation Project grant.