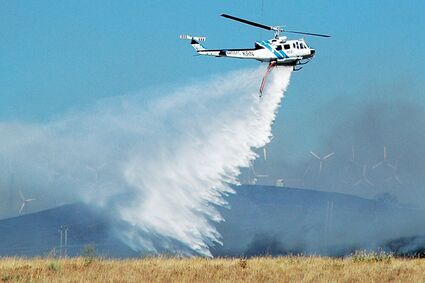 Kern County Fire Department helicopter 408 fights a grass fire near wind turbines at the east end of the Tehachapi Valley.

One of Kern County's most strategically important fire stations is the little-known Keene Fire Station, located just off Highway 58 in the sleepy community of Keene, nestled in the Tehachapi Mountains. Kern has 48 different fire stations given numbers between 11 through 79, starting with Station 11 at Keene.

So why would Station 11 be so significant, given that Keene itself is home to only a couple of hundred people at most? Because Keene is one of the main wildland firefighting stations, with two helicopters assigned to the heliport there, each with hand crews in addition to the three-person crew that staffs Station 11 around the clock.

This means that Keene is a very busy station during the dangerous summer and fall fire season, responding to wildfires not just in the Tehachapi Mountains but throughout Kern County and even beyond. The big helicopters are Bell UH-1H helicopters, commonly known as Hueys, and are retired Army helicopters, a 1966 model and a 1967 model.

Now assigned the numbers 408 and 407, these large helicopters can quickly whisk hand crews to a wildfire, drop them off and then lower their siphons to suck up 360 gallons of water and begin functioning as fire attack helicopters, dropping water on the blaze. The copters can fly about 120 miles an hour and travel about 90 minutes before needing to refuel. These helicopters are equipped for hoist rescues, and are also capable of night-flying. When needed, these helicopters and their dedicated crews can drop water on a fire all night long.

Station 11 tends to be the first one to respond to accidents on the busy Highway 58, and also gets a number of calls associated with the Union Pacific railroad tracks heading to Bakersfield. The Keene station also assists during many calls up in the Tehachapi area. Interestingly, not many calls originate in Keene itself. "People living in Keene tend to be friendly and nice to us, and they're also pretty tough and self sufficient – we don't get many medical calls from here," I was told by Captain Andy Franchere, who is now assigned in Golden Hills. "If we get a medical call from Keene, we know it's usually something pretty serious." Because of the station's isolated location along the highway, motorists sometimes stop by to ask for directions or even gasoline if they're panicked about not being able to make it to Tehachapi.

Because of the emphasis on fighting wildfires, activity at Station 11 slows considerably once rains begin – at least when we're not in a severe drought – and the fire season ends. The station itself is one of the county's oldest, having originally been completed in 1953, though naturally there have been upgrades since then. Funds made available because of the pandemic allowed the county to divide a dorm into individual sleeping quarters, as well as bring the kitchen up to current standards. 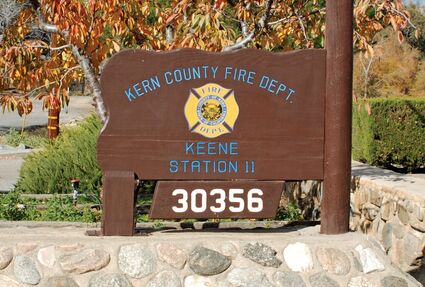 The fire station at Keene was built in 1953, long before Highway 58 was completed.

Like most county fire stations, there are three crews – designated A, B and C – each consisting of a captain, an engineer and a firefighter that staff the station in 48-hour shifts. Battalion chiefs were formerly based in a separate house on station property, but now that residence is used for helicopter crews and the battalion chiefs stay in Tehachapi. Battalion 1 consists of all the stations whose numbers begin with a 1: Keene-11, Tehachapi-12, Golden Hills-13, Mojave-14, Rosamond-15, Bear Valley-16, Boron-17, Stallion Springs-18 and Camp 8.

Though its importance may be overlooked by most Kern County residents, Station 11 in Keene is vital to protecting lives and property from wildfires in the 8,000 square miles of Kern County, the third-largest of California's 58 counties. Those who are familiar with this station are proud of the role its crews play in fighting wildfires.