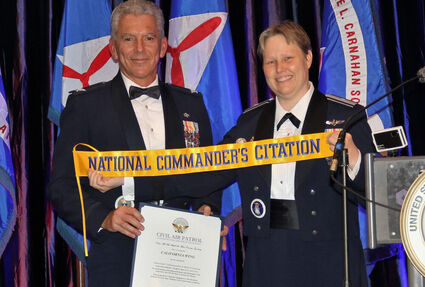 Brigadier General Regena Aye (right) presents the National Commander's Citation to California Wing. The sash will adorn the California Wing Flag at parades and other public events. Col. Ross Veta (left) accepts the Citation on behalf of the entire wing.

The citation reads: "National Commander's Unit Citation – For the period 1 March 2020 to 31 July 2021. For exceptionally outstanding performance and achievement in the execution of the Civil Air Patrol's missions for America."

During this period, California Wing assisted with distribution of over 2.3 million meals at food banks for COVID relief. Provided thousands of hours of volunteer work to communities in need. Flew over 70 sorties in support of California Wild Fire recovery and processed nearly one hundred thousand images of fire ravaged areas. Also, managed the longest mission in the history of California Wing using virtual meeting technology to staff incident command positions.

In an email to the Wing, Col. Ross Veta said, "Each and every member highly deserves this award, whether serving on the 'frontlines' or supporting the organization at the local unit level. This is a particularly important award because it signifies recognition of California Wing at the very highest level of Civil Air Patrol and has been achieved as a result of the efforts of EVERYONE in the Wing." Col. Veta continued, "I am proud of the achievements of California Wing during this time of adversity. Most of all, I am proud of each and every member for what you do for us all on a daily basis. Thank you for your service and for what you do."

Acting as a Total Force partner and official civilian auxiliary of the Air Force, Civil Air Patrol is aligned with 1st Air Force to rapidly respond to non-military threats domestically when tasked in a Defense Support of Civil Authorities capacity to save lives, relieve suffering, prevent property damage and provide humanitarian assistance.

Established in 1941, Civil Air Patrol is the official auxiliary of the U.S. Air Force and as such is a member of its Total Force. In its auxiliary role, CAP operates a fleet of 560 single-engine Cessna aircraft and more than 2,100 small Unmanned Aircraft Systems (sUAS) and performs about 90% of continental U.S. inland search and rescue missions as tasked by the Air Force Rescue Coordination Center. Often using innovative cellphone forensics and radar analysis software, CAP was credited by the AFRCC with saving 107 lives in fiscal 2020. CAP's 56,000 members also perform homeland security, disaster relief and drug interdiction missions at the request of federal, state and local agencies. As a nonprofit organization, CAP plays a leading role in aerospace education using national academic standards-based STEM (science, technology, engineering and math) education. Members also serve as mentors to over 23,000 young people participating in CAP's Cadet Programs. One of the premier public service organizations in America, CAP benefits the nation with an estimated economic impact of $209 million annually. Visit http://www.CAP.News or http://www.GoCivilAirPatrol.com for more information.