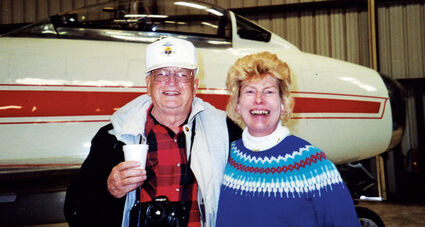 I remember speaking at a funeral for a dear friend from Navy League nearly twenty years ago. Another one of the "greatest generation" gone from this Earth.

Rufus Cook, born in Gilroy, California in 1919, was a student at Stanford University in 1941 when WWII beckoned. Already a licensed pilot, he joined the Army Air Corps. Rufus trained in Oxnard, Bakersfield (Minter Field) and graduated in the class of 42-D from Stockton. He became a bombardier cadet and B-17 instructor in Albuquerque, New Mexico. He flew B-17s and B-29s, carrying troops between the U.S. and England for the war effort.

The last time Rufus was at Mojave Airport was during a tour with the Kern Historical Society. Two busloads of folks from Bakersfield came over for a flight line tour and a barbecue at our hangar in April. The wind was howling! It was quite cool, but the spirits of the Historical Society members were warm and upbeat.

One of my favorite memories of Rufus was his wonderful response to a telephone call. He would always say, "How can I help you?" He was an amazingly giving person!

A true adventurer, Rufus was an avid underwater photographer, SCUBA diver, geologist, oilman, paleontologist, archeologist, sailor, pilot, woodworker, hiker, fisherman and skier. He loved people and could talk about any subject. He always wanted to hear about your latest adventure, especially if it involved flying.

After graduation from Stanford University, receiving his Master's Degree in Geology, he joined Standard Oil Co. of California in Taft in 1949. This job took him to the Persian Gulf, the vast deserts of Khuzestan, Iran and the steamy jungles of Indonesia (Java, Sumatra, and Borneo). He liked to tell people, "Yes, there are still headhunters in Borneo."

Al and I knew Rufus best from Navy League. He served on the Bakersfield Council Navy League Board and helped set up many of the field trips to visit ships in San Diego or the geothermal labs at China Lake. He was also our council photographer, always with a camera around his neck. He looked like a habitual tourist!

Sometimes Rufus would bring a friend or two from Bakersfield to Mojave Airport just to talk with Al and look at airplanes. They would sit in the PBY or F-86 and hangar fly, as many pilots do from time to time. 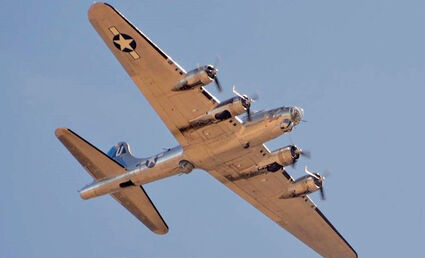 He was an extraordinary storyteller. He was part of a consortium to explore and develop the petroleum resources of the Persian Gulf and the hot, rugged deserts of southern Iran. He had learned to write and speak Farsi and had many Iranian friends.

In 1975, he was in Iran during the fall of the U.S.-backed Shah and nearly lost his life during a riot. His boss was killed by a car bomb. It was a serious situation and he barely escaped angry Iranian mobs. He came home to Bakersfield.

Everyone who met Rufus became his friend. He had a huge love of life, love of country and love for his family. He is truly missed. His son Casey comes to Plane Crazy Saturday on a regular basis. It is always good to see him and remember his dad, Rufus Cook.