Famous war planes from our past 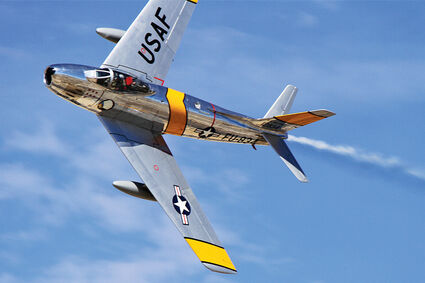 I really miss going to air shows. Two of my favorite warbird aircraft are the P-38 Lightning and the F-86 Sabre. The flybys performed by both these aircraft are real crowd pleasers. The pictures included are at Fox Field, L.A. County Airshow in Lancaster, California. I wish to thank two media directors/event coordinators that gave me fantastic VIP treatment: Patricia Fregoso-Cox and Susie Newman Harrison. If they had not helped me out I would have not been able to get up close with the aircraft, crews and teams.

Actual US military serial 52-5012: the F-86 H Sabre saw Argentinian Air Force service as C-127. It is painted to represent the famous Jolley Roger, the aircraft of Korean War ace Captain Clifford D. Jolley. He was to score seven Korean War victories, flying with the 335th Fighter-Interceptor, part of the 4th Fighter-Interceptor Wing. Note the aircraft's name is correctly portrayed as "Jolley Roger", referring to the pilot's name.

Many, many reproductions have shown this incorrectly as the more obvious “Jolly Roger;” this version is very well done. It is on display in the Jet & Air Racers hangar at the Planes of Fame Museum in Chino, California.

The North American F-86 Sabre or the Sabrejet is a transonic jet. The Sabre is best known as the United States’ first swept wing fighter that could counter the swept-wing Soviet MiG-15 in high-speed dogfights in the skies of the Korean War (1950–1953).

U.S. military serial 44-23314: this P-38 Lightning “Skidoo” originally joined Ed Maloney’s collection in 1959, this P-38 was on static display until restored to fly in 1988. She then spent some time at Planes of Fame East in Minneapolis, operated by Bob Pond, before returning to Chino in 1998. She has recently been repainted and now wears the markings of “Skidoo,” flown by Captain Perry J. “Pee Wee” Dahl of the 432th Fighter Squadron, 475th Fighter Group. Appropriately, she now lives in the P-38 Lightning & 475th Fighter Group hangar, Planes of Fame Museum, Chino, California. 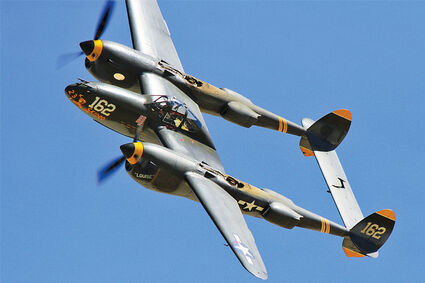 There is nothing like the sound of two V-12 turbo supercharged 12-cylinder Allison motors at full song, I can tell you. The two turbo superchargers also provided the P-38 with good high-altitude performance, making it one of the earliest fighters capable of performing well at high altitudes.  It was extremely forgiving and could be mishandled in many ways.

At one point in the P-38 demo flight, I was standing alone to the far right of the Air Show center on a rock pile about 10 feet off of the ground, and the pilot lined up on me and did a low pass over my head. I could look up and see the pilot. Just fantastic to see the great handling of an 80-plus-year-old aircraft with the great pilot Steve Hinton at the controls.

Some of the above information was compiled from interviewing the pilots’ crews and teams at the L.A County Airshow. Other information is from en.wikipedia.org/wiki/Planes_of_Fame_Air_Museum.