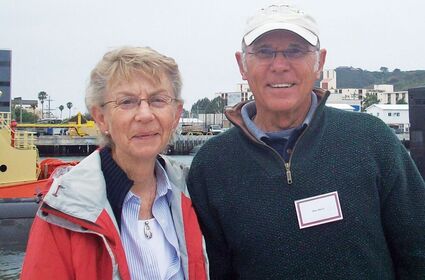 Sally & Mike Melvill getting ready to board USS Asheville in San Diego.

Sally and Mike Melvill are two of the finest people on planet Earth! Mike Melvill was born in Johannesburg, South Africa in 1940 and immigrated to England in 1960.

Sally's father was born in the U.S.A., and as a citizen he was able to bring his family members to the U.S. Mike and Sally came to the U.S. with their two sons in 1967 and settled in Indiana.

Mike often has said that he had no formal higher education and was a machinist for many years. He was part mechanic, part machinist, part designer and fabricator.

He earned his pilot's license in 1969 and bought the plans to build a Rutan VariViggen in 1974.

Mike said that he had no idea who Burt Rutan was when he bought this set of aircraft plans, but he was the first individual to complete one of these aircraft. Sally and both of his boys helped with the project.

Sally received her pilot's license in 1977, and both Mike and Sally hopped into their newly completed homemade aircraft and flew it from Anderson, Indiana to Mojave, California where Burt Rutan had a small company called the Rutan Aircraft Factory.

Burt had built his own prototype VariViggen, but had not seen another like it until he saw Mike's. Burt asked to fly it, and after he had done so, offered both Sally and Mike a job at his small company nearly 2,000 miles from where they lived.

The Melvills accepted Burt's offer, sold their home in Indiana, and set off in two cars to drive to the high desert in California. Melvills worked for Burt Rutan for 32 years and Mike became the test pilot for all of the 30 or so different aircraft Burt designed over the years, including SpaceShipOne. He was Vice President/General Manager of Scaled Composites and Chief Test Pilot before his retirement in 2007.

Sally Melvill was extremely attentive when she worked at Scaled Composites and has always been kind-hearted and loving when dealing with people. She loves life and truly treasures the beauty of nature. Mike was a falconer when he was young and the splendor of the birds of prey in flight was always inspiring to the Melvills. Preserving nature's beauty is important to both of them.

Both Mike and Sally are active members of the Tehachapi Society of Pilots and participate in the many activities sponsored by the group.

In June 2011, Mike and Sally joined some members of the Bakersfield Council Navy League for a special cruise aboard the USS ASHEVILLE, SSN-758, fast attack nuclear submarine.

Mike Melvill, America's First Commercial Astronaut, is the only test pilot I know of that rode on top of an airplane as a test pilot. In April 1993, Mike Melvill climbed on top of a makeshift seat mounted to the Raptor UAV (unmanned aerial vehicle) and took flight. Initially this aircraft was not built to be an optionally manned UAV.

According to Scaled Composites' website, Raptor was a very early high-altitude UAV meant as a platform for testing the technology to detect short-range ballistic missiles and neutralize them. The UAV tech in 1992 was being vetted, so having a safety pilot ride onboard was a way to protect the customer's investment. Recognizing this risk early on, the budget allowed for two vehicle builds, so when the first demonstrator crashed during an unmanned flight, the second demonstrator took its first flight within six months of the loss.

Melvill is most famous for his flight test work at Scaled Composites with SpaceShipOne, designed by Burt Rutan.

Melvill piloted SpaceShipOne on its first flight past the edge of space, flight 15P on June 21, 2004, thus becoming the first commercial astronaut and the 435th person to go into space. He was also the pilot on SpaceShipOne's flight 16P, the first competitive flight in the Ansari X Prize $10-million competition.

Mike shared some stories about the exciting and terribly hazardous trip that he and Dick Rutan undertook in 1997, flying their homebuilt Long-EZs around the world with the EAA Friendship Tour at the 40th anniversary of the first Long EZ flight celebration held in 2019. 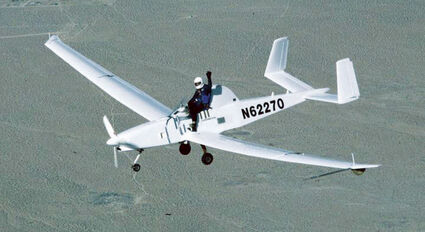 They departed Mojave on April 4, 1997 and headed east. They crossed all the world's oceans, visited 14 countries, traveled more than one-and-a-half times the distance of the equator, and returned home to Mojave on June 24.

Mike Melvill was one of the most accomplished civilian test pilots around. He still owns and flies his Long EZ and a Pitts biplane. The Melvills call Tehachapi home.