Coach Perkins, the right man for the job 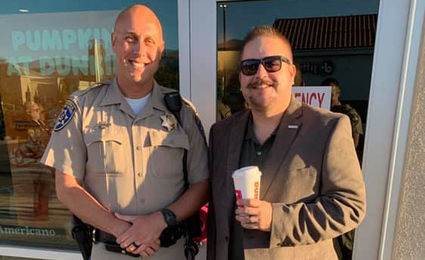 New THS boy's basketball head coach Jimi Perkins (left) and columnist Corey Costelloe in 2019. Perkins will look to take his success as head coach of the girl's program to the boy's team in 2021/22.

There is nothing better than good people receiving good opportunities. I feel like there is a lot of that happening at this moment with Tehachapi High School athletics.

The Warriors have some coaching changes in a few sports and, as mentioned, there are some quality individuals up for those openings.

One of them is someone, that after a few years of working with, I consider a friend. Matter of fact, he sent me a text message when he learned he was being hired as the head boy's basketball coach for the Tehachapi Warriors. Jimi Perkins is not a new name on the Tehachapi basketball scene, minus last year when the courts were dark, Perkins built the girl's program into a South Yosemite League powerhouse, winning a pair of league championships and taking them as far as the CIF Central Section Division II semifinals a few years ago. All the while competing against teams twice our physical and enrollment size, he did the job well.

He stepped away from coaching last year as his son was playing in the boy's program and he understandably did not want to miss out on those games. Turns out there never was a season due to COVID-19 and the boy's head coaching position opened. Jimi was there to put his hat in the ring.

Some of you may know of Jimi as a basketball coach, others may know him as Officer Perkins of the California Highway Patrol. I'm probably the one person who slows down when I see a CHP unit in the area, not because I am speeding, but because I'm looking to see if it's my pal Jimi so I can slow down and give him a hard time, or just see how his day is going.

Officer Perkins makes plenty of sacrifices to be a head coach of this program. His vacation time is used for team purposes when the need arises, and he works countless hours not only preparing his squad but fulfilling his officer duties, as well. It is not uncommon for him to leave the gym after a game and head straight to Mojave to start his shift on our local highways. It helps that he is a basketball fanatic and someone who truly values developing young people, not just coaching them. He also has plenty of support from his co-workers at the CHP Mojave Substation making his support structure vast both on and off the court.

Today, where anti-law enforcement rhetoric dominates headlines and social media pages, oftentimes the faces of the men and women behind those badges are not showcased properly. I cannot think of a better person to help teach young people about making appropriate decisions in life and showing them the true side of law enforcement and the benefits of making good choices when one is young.

The coming season will bring challenges as Tehachapi will once again compete in the SYL, a tough place for hoops. In two seasons Tehachapi joins the "directional" league as it is temporarily being identified as consisting of North, South, East and West High Schools. Still not a cake walk when it comes to boy's basketball. Both challenges I know Coach Perkins is up for, and his team will be, as well.

While wins will be nice, championships even nicer, creating quality young men and placing them into society will be a true victory for Tehachapi. I think the wins will come, the championship drought will end sooner rather than later, and Warrior basketball will make its mark. I think we are lucky to have the right man to do it.