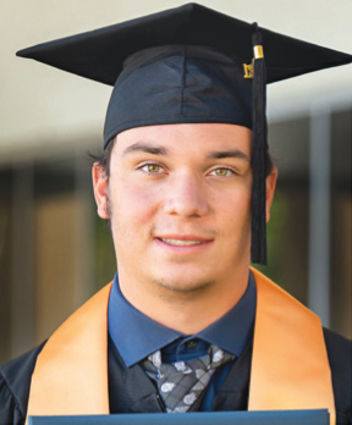 Scott Bugé began his high school career in 2017 after culminating from Jacobson Middle School. At the end of eighth grade he applied to be accepted into the Tehachapi High School Engineering and Manufacturing Academy (THEMA). He was accepted and was in the Academy for all four years of high school. Being in THEMA entailed taking AP classes every semester.

Beginning in ninth grade, Scott was on the varsity swim team. He spent four years as a Warrior swimmer. During ninth, tenth and eleventh grades he was in the band, something he had done since entering sixth grade. He was unable to be in band, something he loved, in twelfth grade because of scheduling conflicts.

Scott's other interests included participating in the Chess Club and the Astronomy Club. He was also a valued member of the Mathletes Team when he was a sophomore and a junior.

The summer between his freshman and sophomore years he began taking classes at Cerro Caso Community College in a dual enrollment program. Because he took so many classes at Cerro Coso, attending school year round, he earned enough credits there, coupled with the AP classes he took at Tehachapi High School (THS), that on May 14, 2021 he graduated from Cerro Coso with both an AA and an AS degree as a Phi Theta Kappa honor student. That is something no other THS student has ever done.

In his junior year, Scott was accepted by Northern Arizona University (NAU). In his senior year he was awarded a $24,000 scholarship by NAU. He will be a math major and be in the ROTC program. In his second year of college, he will be in an officer training program for the US Air Force.

Scott's accomplishments are all the more remarkable when one considers that for almost all of his school career, beginning with kindergarten, he struggled with a serious and painful medical condition. He periodically had to be on independent studies when physically unable to attend school. The medical condition has been resolved so that now he can look forward to good health in college.

This summer Scott will serve as a lifeguard at the Dye Natatorium.