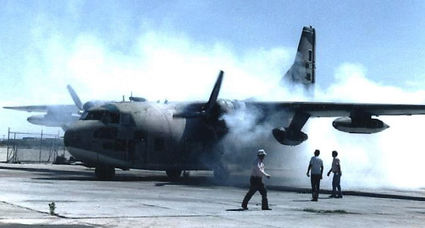 The Mojave Transportation Museum saluted radial engines at the May 15 Plane Crazy Saturday and Mike Nixon, president/CEO of Vintage Radials, was so good to come and tell everyone about these great round engines. It reminded me of some of the airplanes we have owned with big radial engines.

In January 2003, we owned a C-123K Provider and my husband Al decided to start the engines. It sounds easy enough, but it takes a lot of preparation since it had been sitting for several months. The Fairchild C-123K has two Pratt & Whitney R-2800 CB-16 Double Wasp, 18-cylinder, two-row air-cooled radial engines or as they say in air racing, "Big round motors." The C-123 also had two J-85 turbojet engines (two turning, two burning). We removed the jets and she flew fine with just two turning. The jet door actuators always gave problems and we didn't like to use them anyway.

Not only are they big and round, they are smoky, loud and oily. The bottom cylinders fill up with oil when they have been sitting for a while, creating a liquid-lock and the spark plugs have to be removed to drain it out. The propeller is pulled through by hand as the oil runs out of the spark plug holes and the plugs are cleaned and reinstalled.

It still isn't ready to start though, now you have to pre-oil the engine to prevent scoring of the main bearings. We use an external air-actuated oil pump attached to the fitting at the oil screen to pre-oil the C-123 engines. Someone sits in the cockpit and watches for oil pressure. When the oil pressure needle starts to move up, with the mags off and no fuel, you motor the engines over with the starter to circulate the oil throughout the engine. After all that, you are then ready to start the engine.

We had a pre-oiling system on one of our HU-16 Albatrosses. It was really slick, as long as the oil was warm.

The reason there is so much smoke when it first starts is from the oil dripping in the exhaust stacks and then burning off when the engine fires up. Any residual oil just blows all over whatever is behind the engine!

I remember every time we started the 123, the airport would roll the fire trucks. We tried to explain that we weren't on fire. We were just starting a big old round engine that had been sitting for a while. Finally, I would call the tower before we started to let them know that there would be a lot of smoke, but not to worry, we weren't on fire!

I love the smell of avgas, especially the 145-octane that the F4U Corsair used that my family used to crew in Reno. I remember standing behind it when it started and my clothes were a sight, spattered with little black dots. Sixty-weight oil is impossible to get out of clothing. 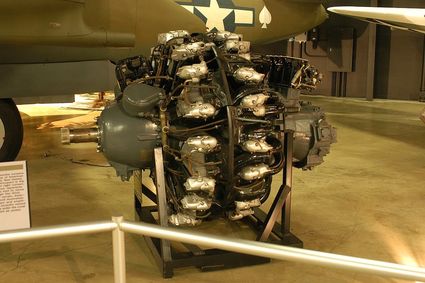 In 1949, the U.S. Air Force expressed an interest in a powered version of the Chase Aircraft's XG-20 glider. Two R-2800s were installed and it became the XC-123 Aviatruc and was flown in October 1949.

With a fresh annual, our Provider was on her way to becoming a star in Spartan, a movie directed by David Mamet and starring Val Kilmer.