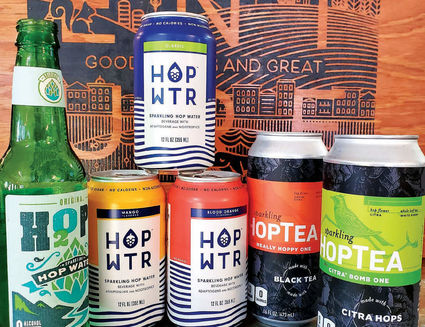 Move over IPAs and other craft beers, there's a new kid in town: hop waters. Hop water gives you the bite and flavor of a beer without the alcohol and calories and Tehachapi Natural Market is the place to get it.

When most of us think of hops we think of "barley and hops" as they relate to beer and yes, the hops used in beer are the same as the hops used in the hop water. Hops are the flowers, or cones, of a plant called Humulus lupulus which belongs to the Cannabacea family, the same family that includes Cannabis.

When added to water or tea, hops create a refreshing beverage. There are at least 100 different varieties of hops with new varieties constantly being bred. One of the most popular is the Citra hop which is used along with white tea in Hoplark's Citra® Bomb One Sparkling Hoptea. Citra hop has a strong yet smooth floral and citrus aroma and flavor. Citra is combined with black tea and Simcoe hops in Hoplark's the Really Hoppy One giving it more of a weight and bite than the milder Citra Bomb.

A Market favorite is the H2OPS water. H2OPS was founded in 2014 by Paul Tecker, who is a long-time home brewer, craft beer enthusiast and proponent of healthy food and beverages. He believes that the amazing flavor of hops shouldn't be limited to craft beer.

Another best seller is the brand HOP WTR. Their offerings include an unflavored, sparkling hop water along with two others that are infused with mango or blood orange.

Is the hype around hops deserved? The folks at Tehachapi Natural Market give a resounding YES to that question. Market co-owner, Sarah Rose, admits that she's a bit obsessed with it, "I drink this stuff all day long, whether I'm at home or at the market. Like many people, I don't drink enough water even though I know how important it is. But I can easily drink 8 cans or bottles of this a day which provides me with plenty of hydration that I know has aided my recent weight loss." Are there other benefits beyond hydration? "Absolutely," Sarah tells us. "During my work day I drink the hop tea that has caffeine so I stay calm yet focused without any drowsiness. The drinks contain nootropics, which are substances that improve cognitive function, in particular relating to focus, creativity, memory and information recall as well as adaptogens, which are herbs and roots that support your body in handling mental and physical stress. The humulene and lupuline found in hops have mild sedative properties which is wonderful after a long day at work. I don't drink any alcohol at all so this is an enjoyable but healthy way to unwind in the evenings. We've had several customers tell us that they are using the hop water as a replacement for beer, especially when socializing."

But don't take our word for it. Head on over to Tehachapi Natural Market at 20221 W. Valley Blvd., Tehachapi and get your hop on!