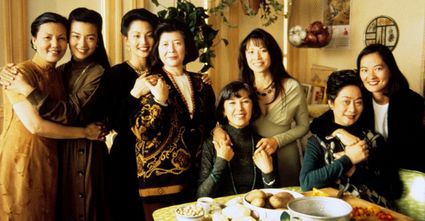 "The Joy Luck Club" is a 1993 American dramatic film, directed by Wayne Wang and based on the 1989 novel by Amy Tan.

This is a film about familial love and the things mothers will do for their daughters. The framing device of the film is a going away party for June. The characters remember and contemplate their relationships with their mothers and daughters.

The cinematography in this film, more than the others I've reviewed, is more motivated. Early on, there is empty space where a dead character should inhabit and the daughter of the character finds herself filling this spot on a few occasions. I wish the film fell more into this style but doesn't quite get to that point. That isn't why you'd watch this film, however. This film is all about the characters.

The mothers all experienced objectification and degradation to an awful degree. Their abuses from men are immense. The film works well as a cautionary tale about what types of men to avoid. I won't go into detail about the many abuses these women face as they aren't appropriate for this review.

All of the mothers survive their time in China and decide to move to America. Their goal is to raise children in America so they may never face these abuses.

The daughters were all raised with an amount of distance from their Asian heritage. It isn't absent from their lives, but they are very much distant from their ethnic identity. This is by design. In the opening narration, one of the mothers says her daughter will speak fluent English and she hopes for her daughter to integrate into American ways and never have to "swallow misery." All of the daughters have English names like June, Waverly, Rose and Lena. I can corroborate this tactic. My father and uncle were born in Japan but their names are Arthur and Edward instead of Hiroshi or Shiro.

The film also explores the idea of the stereotypical high expectations of Asian parents, whether that generation imposed that on them or not. There is a rivalry between two of the families about who can produce the best prodigy. This leads to both daughters hating their given crafts and creates a wedge between the mothers and daughters. This wedge is resolved when the mothers and daughters see each other for what their goals truly are.

In many parts of the film the phrase "swallowing misery" is used. Two of the daughters do everything they can to make their husbands happy. In the process, they sacrifice what makes them happy.