Butterflies of Tehachapi: a symphony of beauty on the wing 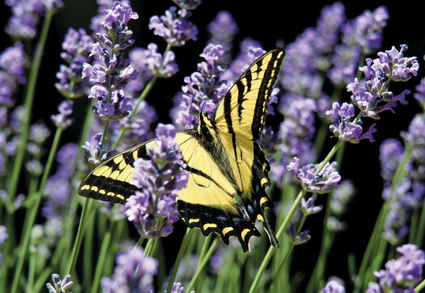 Many butterflies can often be found in the Tehachapi Mountains during the warmer months, as blooming wildflowers as well as garden blossoms provide food and refuge for these nectar-feeding adult insects.

Among the first to arrive are the Painted Lady (Cynthia cardui) butterflies, which flow northward in a great river of winged beauties in March and April. These butterflies, considered to be the "most cosmopolitan butterfly in the world," start their lives as tiny caterpillars in Mexico and then once they turn into adults, they stream north to repopulate the upper half of the North American continent.

Painted Lady migrations usually involve many millions of butterflies, and on certain ideal migrating days, you can stand still in the Tehachapis and see hundreds of them pass by in a half-hour's time.

With their big pale yellow wings marked with black stripes, Western Tiger Swallowtails are a thing of grace and elegance as they flitter and glide through the warm summer air.

The orange and black Monarch butterflies (Danaus plexippus) are very familiar and can still be considered common here, though their numbers are not nearly as high as they used to be. Monarchs have faced a well-documented number of challenges, but efforts are now underway in many states to provide them with more nectar sources, fewer pesticides and better protection.

Monarch caterpillars are very distinctive and marked with thin bands of yellow, black and white, and they feed on different species of milkweed. Narrowleaf Milkweed (Asclepias fascicularis) is abundant in the Tehachapi Mountains, and provides ample feed for Monarch larvae, provided there are adult females around to lay their eggs on the milkweed.

The California Sister (Adelpha bredowii californica) is a good example of this: the upperside of their wings is a faintly iridescent black with a large orange spot and smaller white spots, while the underside is grey, white and the pale faded straw color of dried oak leaves. A California Sister on the wing is hard to miss, while a California Sister landed on the ground amid the dead leaves of a Canyon Oak is hard to spot. California Sisters are common in Water Canyon and at higher elevations in the summer.

Another medium-sized butterfly is the Buckeye (Junonia coenia), which likes to feed on Rabbitbrush (Chrysothamnus nauseosus). These butterflies are named for their six attractive "eye spots" on the upperside of their wings, though they often land on the ground and fold their wings so that only the very drab undersides are visible.

One of the most common smaller butterflies you'll encounter is the Cabbage White (Pieris rapae), which was accidentally introduced to North America from Europe in the 1860s. These are now considered to be the most common butterfly in the world and the larvae will chew holes in cabbage and the leaves of other cruciferous plants.

Despite being labeled as a garden pest, the adults themselves of course do no harm (unless laying eggs on cabbage plants), and I enjoy seeing these small pale butterflies, which are faintly cream-colored on the underside of their wings. 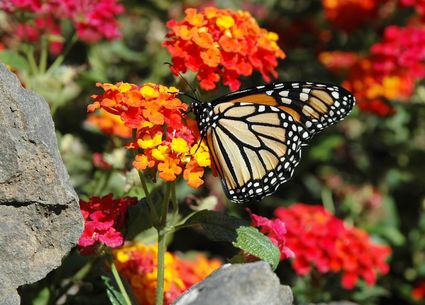 A Monarch feeding on flowering Lantana.

Butterflies are one of the visual delights of the natural world, and are cheering to encounter in the wild or your own garden. We can help these and other pollinators through our choice of plantings to attract them. I'll write a future column on gardening in our area for butterflies and other pollinators. Now that warmer weather has arrived, keep your eyes open for these delicate little airborne sailing ships. . .