A visit to a restaurant that changed my life! 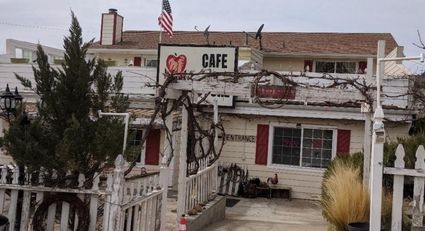 The long and meandering road took its final turn at a quaint fenced cottage. This cottage was a restaurant. I thought it was so charming, so I took a picture of it.

We walked into the cafe and the room was filled with the delicious, savory smells of baked goods. Somewhere in my brain, this smell was familiar, but I dismissed it. Then I saw a large, vintage pastry display case filled with the goodies. My brain sent me another familiar signal. At this point, I began looking around. Then the memories flooded my brain. I had been here before! I realized there were some differences in the setup of the dining room, and the road to get here was not the same as it was before, but step by step, I remembered the last time I had been here. I was thrilled as the memory unfolded of how much my life has changed since the last time I was here.

It was the summer of 2015; I was in Tehachapi on a visit to see my aunt and uncle who lived there. I live in Orange County, California. Typically, after my visits with them I would just rush home in the hopes of beating LA traffic. But that summer day was different. Instead of just driving home I thought I would explore Tehachapi. I enjoyed driving around with my aunt on previous visits, but I had never just gone exploring on my own. On this day, I decided to drive around a little before I left.

I ended up at an Open House; the realtor and I started to talk. I explained that I had did not know very much about the area. He asked me if I ever heard of Bear Valley Springs. When I told him, "No," his face lit up. He mentioned that he lived there, and his company was hosting an Open House in Bear Valley. He encouraged me to go see the house and gave me directions before I left. I got in my car and wrestled with my monotonous thoughts that kept nudging at me to go home. I overrode the mental prodding, and I headed down Highway 202. When I saw Cummings Valley for the first time, I was stunned at the unexpected beauty of the valley. There were rows and rows of multi-colored plants, and the mountains that encircled them were lightly covered in green grass. It was a beautiful sight!

After my discovery of Bear Valley, I was tired and I need some coffee. Then I noticed a quaint restaurant down the road on the outside of the Bear Valley entrance. The smell of fresh coffee and just baked cookies filled the air. I ordered some coffee and sat down to relax. It was a good feeling. When it was time to go, I took home the newspaper I had been reading while I was having my coffee.

After I got home later that day, I saw a classified ad in the help wanted section of the newspaper. It said, "Contributing Writer Wanted." I had been writing for years. Becoming a paid writer was a childhood dream. I had an idea for a column, so I called the number and left a message. The owner of the paper liked my idea and I ended up having my own column in that newspaper for 3.5 years. This led me to more writing and I now have written four books and am working on my fifth. I have opened my mind to being more creative, and I realize the power of one thing leading to another. I have become more of the person I was meant to be.

I was so glad I was able to revisit that quaint cottage that I now know is called Moessner Farm Café and Store. I had the opportunity to talk with Mike, the owner, and let him know how that my visit to his restaurant those few years ago led me down a path of creativity and a childhood dream coming true. Yes, going to Moessner Farm Café changed my life and I am grateful.