Remembering our Veterans and the aircraft they flew 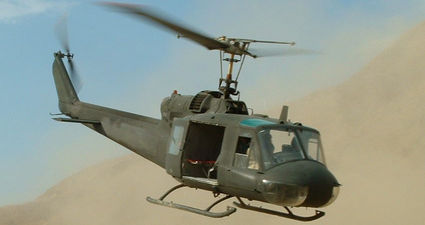 Sixteen years ago, my husband Al and his son Dor helped set up a UH-1B "Huey" for a Vietnam Veteran Memorial at Tehachapi Airport. The UH-1 helicopter was the "icon" of Vietnam. All veterans of Vietnam know the image and the familiar sound of the Huey.

The plaque says it all: "This Vietnam War 'Huey' Helicopter is a symbol dedicated to honor all the brave men and women who courageously fought the tyranny and oppression in Vietnam. May their courage and heroic efforts – for which many lost their lives, were injured and maimed or were imprisoned and tortured – never be forgotten."

Whenever technical advice or parts were needed for the machine on display, Lou Vandenberg at Benbow Aviation called Al to see if he might be able to help.

Many years ago, we were at Tehachapi Airport visiting Lou and I just couldn't resist driving along the ramp noticing that some of the hangar doors were open and taking the opportunity to look at the aircraft parked inside.

What a surprise to see a Meyers OTW bi-plane!

Tehachapi resident, Lee Dodd (Lt. Col. USAF ret.) had owned this rare World War II trainer for a number of years. Our friend at Mojave Airport, Al Letcher, had a beautiful OTW too. I have to say how much we miss our dear flying buddy, Al Letcher. He passed away in 2015.

Do you know what OTW stands for? Aircraft designer and spirited American, Allen H. Meyers, just happened to be in the right place and the right time when every airplane that could be constructed was needed by the U.S. government after the Pearl Harbor attack in 1941. He called his aerobatic aircraft the Meyers "Out To Win!" What a great attitude!

Meyers was born in 1908 and always had a fascination for airplanes. He greatly admired his father who was a Swiss Mechanical Engineer and hoped to study aviation in college, but the budding industry had no curriculum offered. Stories of WWI aviators captured his imagination and in 1927, Charles Lindbergh's flight across the Atlantic was the catalyst that gave him the strong will to fly.

After high school he worked for a succession of the pioneer aircraft manufacturers, including Glenn L. Martin, Chance-Vought and Stinson. His specialty was aircraft metal work and he worked as a "tin smith."

He learned to fly in a Curtiss JN-4 "Jenny" with an OX-5 engine at Curtiss Field on Long Island in 1928 and bought a Waco 10 in 1932. Barnstorming and flight instruction became his love and livelihood. An aircraft designer friend, Martin Jensen, traveled with Meyers in a Jensen designed biplane that had a metal fuselage. Meyers was so taken with this aircraft that he decided to design, build and produce an aircraft of his own.

In a single car garage he began construction of an all-metal fuselage, later moving to a larger location, a foundry in Romulus, Michigan. The wings on his biplane were of similar design to planes from the 1920s; thin airfoil with wooden spars and ribs, covered with fabric. His finished biplane, combining old wood and fabric technology of the wings, with the new all-metal fuselage knowledge, first flew on May 10, 1936 and was certified in 1939.

He found his two-seat (tandem seat), open cockpit airplane to be nimble and fun to fly. With the initiation of the U.S. entering World War II Meyers became an aircraft manufacturer.

The Civil Aeronautics Act of 1938 funded a test program called the Civilian Pilot Training Program (CPTP) and colleges were paid by the government to offer 72-hour ground school courses to train civilian pilots. The program also included flight schools to give 35 to 50 hours of flight instruction to willing candidates. The Army Air Corps and the U.S. Navy recruited pilots from the program to go into primary flight training, bypassing elimination courses.

Every airplane that could be constructed was needed and that's when the Meyers biplane became a star. The flight schools favored open cockpit biplanes for aerobatic training, so the Waco UPF-7, Ryan PT-22 (not a biplane, by the way) and the Meyers OTW were the aircraft of choice.

Word spread fast that Meyers had orders for his airplane and the City Of Tecumseh (Michigan) offered special tax incentives if he would move his company. The move was made and Meyers Aircraft Company produced 102 OTWs in the early war years.

One item of note is that no Airworthiness Directives have ever been issued against the Meyers airframe, testifying to its robust design and construction. The wings are staggered for center of gravity purposes and only the bottom wings have ailerons. The large stagger arrangement helps with good longitudinal stability and creates gentle stalls.

Both Lee's and Al Letcher's OTWs had a 5-cylinder 160 HP Kinner engine. From the ground the engine has a distinctive quiet sound, pocketa-pocketa-pocketa, but Lee said when you are inside the aircraft, the sound is louder!

Love it when we find other folks with the desire to keep history alive! These veteran airplanes tell wonderful stories about their designers and the important position they held in history – just like people do!