The Great Train Trip: an amazing Tehachapi train ride became reality on a spring day in 2011 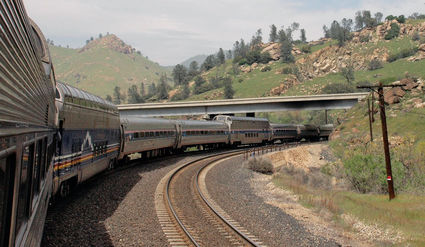 The train passes under Highway 58 at Keene. The easternmost of Three Peaks is visible in the background.

It was 10 years ago that I was able to take a trip that once happened multiple times every day, but now is a very rare experience: a train ride through the Tehachapi Mountains and down to Bakersfield.

Of course multiple trains a day still pass through Tehachapi. The rail line through here is considered one of the busiest stretches of single-track mountain railroad in the world, but they're all freight trains.

After nearly 100 years of continuous operation, passenger train service was discontinued through Tehachapi in 1971. I happened to be a first grader at Wells Elementary School back in 1971, and that year many of us little Tehachapi kids were put on the San Joaquin Daylight and taken on a school outing for one last chance to take a train trip down to Bakersfield.

Like many of us who appreciate the Tehachapi Mountains, I always wanted to repeat the experience. I finally got the chance on April 2, 2011, when the Pacific Railroad Society organized a trip with a handful of passenger train cars that headed from Union Station in Downtown Los Angeles east to Ontario, and then swung back north and went over Cajon Pass and to the Palmdale Cutoff and through Mojave, then went through the mountains over Tehachapi Pass and finally down into Bakersfield.

The Pacific Railroad Society is a non-profit organization founded in 1936 by a handful of railfans in the Los Angeles area. The group now includes more than 450 members and owns more than 20 different railcars or "rolling stock" and operates the Pacific Rail Museum in San Dimas, about 10 miles east of Pasadena. The pandemic has of course resulted in the temporary closure of the museum and interrupted all club outings for the present.

But to celebrate the club's 75th year in 2011, PRS put together the Diamond Jubilee Special Train to take the trip through Tehachapi. While spring "wildflower excursions" through Tehachapi had once been one of the group's most popular trips, a lack of cooperation from railroad companies had put an end to the excursions and the last one had been held in 1979. I happened to score a ticket on the Diamond Jubilee Special Train as a member of the press.

The sky was just beginning to lighten as I left Tehachapi at 5 a.m. on April 2 for the drive to Union Station. A friend dropped me off at about 7:30 a.m. in front of the landmark depot, which has stood in Downtown LA since 1939, and I went inside, checked in and got some breakfast while sitting in the ornate waiting room with my friend and colleague Carin Enovijas and her adorable daughter Ruby, who lived in Tehachapi before moving to Hawaii.

The train, consisting of two Amtrak engines and ten assorted passenger cars, was loaded and pulled out of the station shortly after 9 a.m. Among the cars was Ocean View, a full-length dome car with upstairs observation windows leased from Amtrak, and the Silver Lariat, an elegant privately owned car that was built in 1948 and also features a partial dome observation area. At the end of the train was the Pony Express, a 1941 former Canadian Pacific baggage car whose private owner converted her into a western club car with couches, a bar and open doors for fresh air and photography.

Aboard were 372 enthusiastic passengers who had paid $329 each for the rare opportunity to make the Tehachapi Mountains run, and these travelers ranged from full-on "foamers," (a term used to describe diehard railfans and rail photographers) to those who simply wanted an interesting experience.

About 15 Tehachapi area residents were on board for the thrill of traveling through their home country by rail, including Dave and Nancy Bartlett, who were celebrating their 40th wedding anniversary.

I enjoyed the first few hours of the trip through the city and then out across the desert, but it was when the Tehachapi Mountains hove into view that my heart started beating faster. The gaps between cars where passengers get off and on are covered with a type of Dutch door with a top and bottom half, and I positioned myself at a point where the top half of the doors on both sides where open, giving me unimpeded access for photos and viewing.

The train angled left at Mojave and headed to the mountains, beginning to climb at Cache Creek at 1:15 p.m. The train rolled smoothly and quickly – we passed Cameron at 1:19 and by 1:25 were passing the Love's Truck Stop at the east end of Tehachapi. Thirstily I drank in the scenery, shooting photos from both sides of the train and thoroughly enjoying novel views of a landscape that is etched into my soul. 2011 had been a wet winter and spring, and the hills were green and gorgeous.

As we headed toward the summit, rail fans appeared at accessible points, taking photos of the passing train or just enjoying the sight for themselves. Passengers and onlookers waved to each other, smiling at the simple joy of an attractive train carrying people and not just another noisy freight train hauling lumber, oil, cars and other inert material.

I was proud as the train approached our beautiful Tehachapi Depot, a far cry from the dilapidated structure with peeling paint from which we had embarked on that elementary school trip in 1971. Although the train didn't stop (or even slow down) at the depot, I recognized some friends among those watching and waving from the handsome deck, including Del Troy, Al Aronson and Donna Fischman.

Then quickly we were past the town and the train began to descend to the northwest, the most photogenic part of the trip. Green grass blanketed the slopes while fiddleneck, popcorn flower, goldfields, owl's clover and other wildflowers provided splashes of color. Down in the canyons, both Tehachapi Creek and later Caliente Creek raced the train, full and strong after a winter of ample snow and rain.

We passed through the 12 tunnels that remain of the original 18, their blackened concrete walls so close you could reach out and touch them if you stretched far enough. It was fun to travel around the famous Tehachapi Loop, though since it takes about 85 cars for the train to be long enough to pass over itself; we were about 75 cars too short. I like the deep cut that the train passes through before it enters Tunnel 9 at the Loop, for this stony trough feels like a ravine blasted through solid rock on an old narrow gauge mining train.

The views between Keene and Caliente were especially interesting, because Highway 58 and the railroad tracks are distant during that stretch and the train is passing through pristine mountain rangeland.

I didn't venture back inside the train until we were on the outskirts of Bakersfield at about 3 p.m., after two glorious hours and 350 photos from the open windows. Passengers disembarked at the depot in Bakersfield and walked over to the adjacent Marriot Hotel. Almost all the passengers stayed in Bakersfield that night and rode the train back to LA the next day, but I got a car ride back home that evening since I had other obligations the following day.

"It was a very successful event for us," said Marti Ann Draper of PRS. "Everybody was happy. We used to do this trip every year, when it would only cost 50 bucks, but now that it's much more expensive, we have to be more cautious. We'll definitely do it again though." 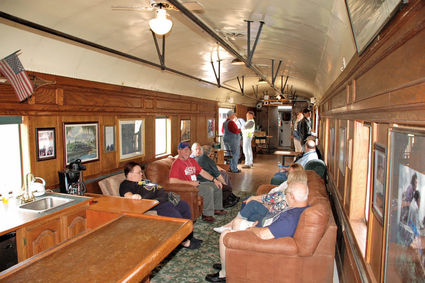 Passengers relax in the interior of the Pony Express, an old converted baggage car that is now pleasant and inviting.

For nearly 100 years, from 1876 to 1971, travelers passed through the scenic Tehachapi Mountains by train, and there are many of us who wish that passenger traffic through Tehachapi had never stopped. For one magical day 10 years ago, we could do more than simply imagine what that would be like. . .