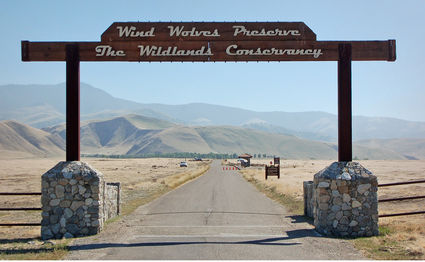 Entrance to the Wind Wolves Preserve.

The largest non-profit nature preserve on the West Coast is located in Kern County, just a little more than an hour's drive from Tehachapi. This remarkable 95,000-acre place is called the Wind Wolves Preserve, and it serves as a crucial wildlife corridor to help connect two parallel mountain ranges. Wind Wolves Preserve is home to Tule Elk, mountain lions, bears, coyotes, deer, badgers and a host of other animals and birds, including the California Condor, one of the rarest birds in North America. There is also a diverse mixture of plant life found on the sprawling WWP.

Wind Wolves was established between 1996-2001 by The Wildlands Conservancy, a non-profit conservation organization that protects properties through land acquisition from willing sellers. The name Wind Wolves comes from the appearance of a tall-grass slope on a windy day: as a gust of wind moves, generally upslope, it makes the grasses swirl, bend and part as though there was an unseen animal running among the tall stalks. These "wind wolves" are a common and mesmerizing sight on the preserve during windy days in late spring when the grasses sway and dance in the breeze.

Because it includes east/west trending Transverse Ranges like the Tehachapi Mountains, Wind Wolves Preserve functions to connect two of California's major mountain ranges: the north/south-oriented Coast Range, closer to the ocean, and the Sierra Nevada, farther inland. Wind Wolves Preserve helps maintain genetic diversity by giving wildlife an access route to move back and forth between these two big mountain ranges.

Wind Wolves contains extensive San Joaquin Valley grasslands, and that's what you see as you drive into the entrance from Maricopa Highway and head back toward the Administrative Hacienda, campground, picnic ground and trails. As you continue up into San Emigdio Canyon, however, the plant life gets increasingly varied and you may encounter some of the resident wildlife. Tule Elk, the smallest and rarest species of elk in North America, were introduced into the WWP more than 15 years ago and now exceed more than 400 individuals. The California Department of Fish and Game estimates that WWP may eventually be able to sustain as many as 2,500 Tule Elk, and a population exceeding 2,000 would – simply through natural attrition – create a steady and dependable source of food for California Condors. These giant carrion eaters are currently provided with occasional stillborn dairy calves and having enough elk would mean that this supplemental feeding could be phased out.

In good years with adequate rainfall – a category to which this year, alas, does not belong – Wind Wolves Preserve offers incredible wildflower displays of lupines, California poppies, owl's clover, goldfields, popcorn flower and much more. Even without the ephemeral wildflower displays, though, spring is a great time to visit Wind Wolves and do a little exploring in this natural treasure in our backyard. The preserve encourages visitation and learning about the natural history of the area through an ongoing series of free programs, tours, trails hikes and classes.

The Wildland Conservancy has stated that "Our dual mission is to preserve the beauty and biodiversity of the earth, and to provide programs so that children may know the wonder and joy of nature," and it is the group's intention to "Make nature relevant to the next generation." More than 120,000 children have participated in the free outdoor education programs at the Wind Wolves Preserve. When you go there, especially during the week, expect to have the place mostly to yourself, because this unique place is not well-known and isn't on the radar of most conservation travelers who tend to seek out state and national parks, monuments and wildlife refuges. If you haven't visited yet, let 2021 be the year you become acquainted with Wind Wolves Preserve. 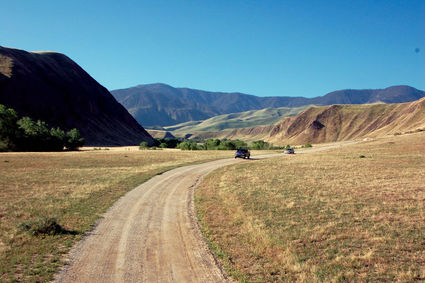 The main road on the preserve is one of the last remaining portions of the Camino Viejo, the "Old Road" that once connected San Diego and San Francisco in California's Spanish Period.

Wind Wolves Preserve is open to the public from 8 a.m. to 5 p.m. each day. Camping is currently closed due to the pandemic, but is expected to re-open later this year. When it is permitted, camping at Wind Wolves is free. From Tehachapi, you can get to WWP by taking Highway 58 toward Bakersfield, then turn off Hwy 58 at the Arvin Cutoff and get on Highway 223. Take it all the way to Old River Road, then follow Old River Road to Maricopa Highway (Hwy.166) and look for the sign at 16019 Maricopa Highway. The phone number is (661) 858-1115, and you can check out their website at wildlandsconservancy.org.