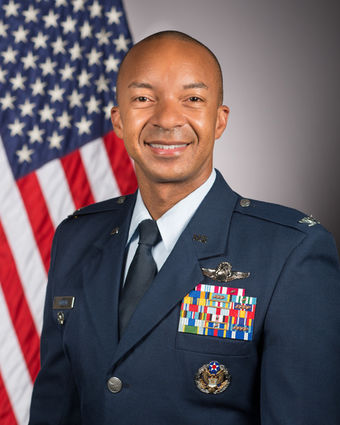 At their first Zoom meeting of 2021 the Rotary Club of Tehachapi hosted speaker Col. Randel (Laz) Gordon, Vice Commander of the 412th Test Wing at Edwards Air Force Base where he leads about 9,500 civilian and military personnel in the developmental testing and evaluation of over a dozen different aircraft and emerging technologies.

Born in Poughkeepsie, New York, Col. Gordon received his commission in 1998 from the Air Force Academy and holds a doctorate from the Air Force's School of Advanced Air and Space Studies. He is a Presidential Fellow, an MIT Fellow and an alumnus of Harvard Business School. To most people he is known as "Laz." He said that the nickname "Laz," short for Lazarus, came from a near-death experience and the name stuck.

Col. Gordon asked Rotarians for topics they would like him to address. The first was how the military was dealing with the COVID-19 pandemic, a topic that took up most of the discussion. Col. Gordon said that the Secretary of Defense stopped all action in March 2020; however, while the private sector turned to teleworking, the military didn't. He said that as activities were limited to the Antelope Valley, this forced the acceleration of off-site collaboration. The one silver lining to the pandemic, said Gordon, was that the military got to connect remotely as on-base contact was mission-related only. In the absence of the original airshow planned for Edwards in October, the Air Force planned county fly-bys and STEM activities that were so successful they may be carried forward into the future. The military is also now looking at what he called "Urban Air Mobility" using vertical lift vehicles and other new planes that can be adapted to military uses in 2021.

Col. Gordon said that the loss of General Chuck Yeager was a "big deal" at Edwards and he felt that because of the pandemic, it was sadly under-addressed outside of the military.

The newly formed Space Force has been separated from the Air Force with its members being referred to as Guardians instead of Airmen. The Space Chief has asked Edwards to assist in the training of the first class of space professionals.

Col. Gordon was asked what educational requirements today's student would need for joining the Space Force. Gordon said he felt the available population that could qualify for military science today would be in the single digits.

"This generation is not built for the military," he said, adding that they "won't be told what to do."

Those interested would need to learn coding and robotics and be on the cutting edge of technology.

Col. Gordon mentioned the Antelope Valley East Kern STEM Network that is currently meeting virtually as a possible avenue for local youth interested in the field.

The Rotary Club of Tehachapi is a volunteer service organization with the motto "Service Above Self." The club has 30 members and are currently meeting virtually on Thursdays from noon to 1 p.m. If you would like more information about Rotary Club, you can visit their Facebook page at http://www.facebook.com/RotaryClubofTehachapi/ or contact local club President Chris Naftel at (661) 221-2137.